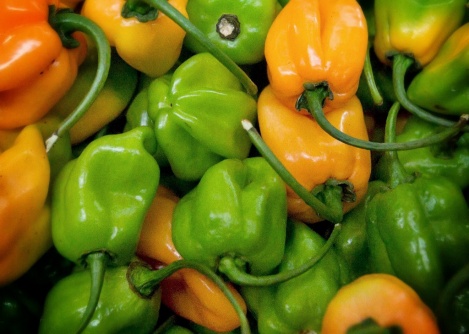 These Used To Be the Hottest Chiles on Record, But Things Have Changed

It was several years ago, when my brother was living in Paso Robles near California’s Central Coast. When I would go to visit him, we usually went shopping together at the farmers’ market at nearby Templeton. Once, one vendor selling olives stuffed with chile habaneros (see photo above) offered Dan and me the opportunity to taste one, all the while grinning as if he expected us to spit them out. We ate the proffered olives, smiled, and asked for more. The vendor looked at us as if we were from the hot side of Mercury.

My brother and I are bona fide chiliheads. It’s one of the things we enjoy most about getting together, because both of us are surrounded by people who blanch at the thought of biting into a sliver of jalapeño, and who carefully remove all pepperoncinis from their salads. We came by this through our mother, Sophie, who used to cook a Hungarian dish called lecso (pronounced LETCH-o), a kind of Hungarian adaptation of Spanish rice seasoned with hot Hungarian banana peppers. When I was growing up, I thought that lecso was altogether too spicy for me. Now I rather like it. (My father, however, did not: He was one of the digestively challenged.)

I can eat chiles up to about half a million Scoville units, namely the habaneros or Scotch Bonnets. If I were to make a large pot of soup, I could put half a chopped habanero in the pot—but no more! As for the superhot chiles such as the Carolina Reaper or Ghost Chiles, they are really too hot for comfortable human consumption, even by chiliheads. I have had powdered ghost chiles on occasion, but only in m-o-d-e-r-a-t-i-o-n.