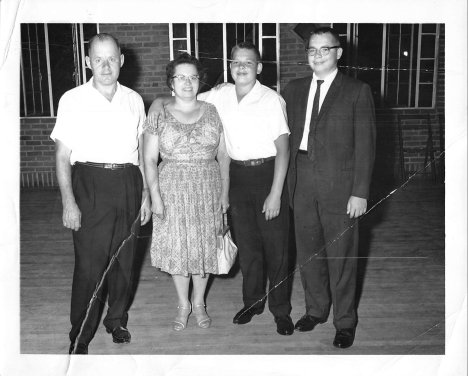 The Paris Family in the Early 1960s

If my mother were alive, today would be her 100th birthday. Unfortunately, she didn’t make it to her 80th birthday. In August 1998, shortly after she hung up after my usual Saturday morning call to her, she pitched forward upon getting up from her phoneside chair, hemorrhaged, and died immediately. Within a couple of hours, my brother and I both knew what had happened. Dan was living only a few miles west of Kings Beach, CA on the north shore of Lake Tahoe at the time. She didn’t answer the phone when he called her, so he sent a neighbor to investigate, and he found her body.

Sophie (or Zsófi) Paris born in Cleveland, Ohio and raised by her grandparents, Daniel and Lidia Toth, who gave up on the United States and took her back to their farm in Felcsut, Hungary. But when the specter of Hitler was beginning to loom, they returned to Cleveland in 1937 on the Queen Mary. There, she met my father, Alex (or Elek) around 1943. Despite the opposition of her grandparents, she married him in 1944 and became pregnant with me. My brother Dan came along in April 1951.

My mother wise incredibly street savvy. She applied for jobs for which she was not qualified, stating on the applications that she was a graduate of the University of Hakapeszik in Budapest, Hungary. Now “Hakapeszik” is another way of saying “The School of Hard Knocks,” or “If one gets his hands on some food, one eats” in literal translation.

She worked as a supermarket checker, a woolen mill, a manufacturer of earphones for pilots (the Rola Company), and eventually an assistant occupational therapist working in a hospital for the terminally ill. She was a wonderful cook and a good-hearted person. She did, however, break a number of wooden spoons on my recalcitrant butt when necessary. At the same time, she was incredibly kind and made friends easily. She was also wise. To this day, I consult her usual practice before making any big decisions. If Sophie wouldn’t have gone for it, neither would I.