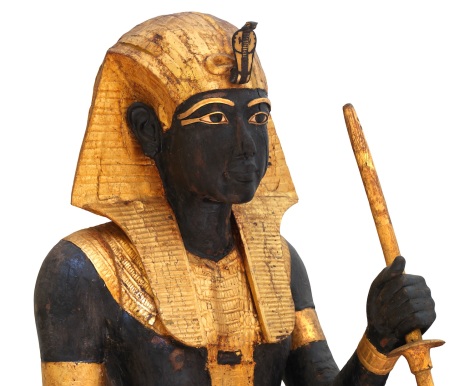 The Guardian Ka for the Afterlife of the Pharaoh Tutankhamen

There has been a major exhibit of treasures from King Tut’s tomb at the California Science Center in downtown Los Angeles. The exhibit started in March and is ending in a few days, so I decided I had better hustle if I didn’t want to miss my second chance at one of the world’s great archeological treasures. (I missed my first opportunity some years back.)

In the end, it was not a pleasant experience. The exhibit was well mounted, but it was mobbed with family groups who were intent on SmartPhone snapshots of everything on exhibit. It was as if instead of people with minds attending the exhibition, the attendees were actually digital devices. No one understood what was being photographed: They were merely putting together a portfolio that could be used to demonstrate to friends that, yes, they had been in the presence. The children were mostly bored and acting up.

In the end, I seriously suggested that, at the entrance to the exhibit, all SmartPhones be collected and smashed to smithereens with mauls. That got a few laughs from the museum staff, but I seriously doubt they acted on my well-intentioned comments.

Although I have been interested in Pre-Columbian archeology for many years, I know very little about Egypt under the Pharaohs. I know I have Howard Carter’s book somewhere in my library about his discovery of King Tut’s tomb, as well as a few other volumes on the general subject, I have been extremely remiss. Resolved: After I return from Central America at the end of the month, I will try to catch up on the subject.

And that is my only New Year’s Resolution for 2019.