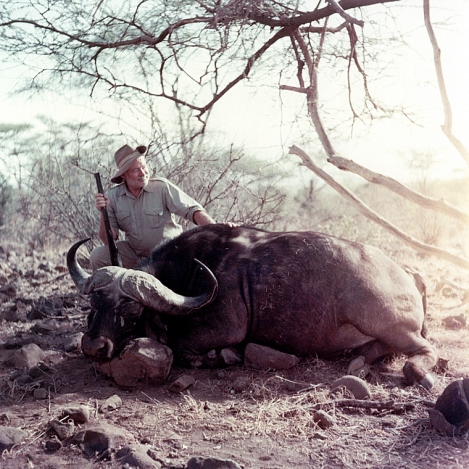 Ernest Hemingway Poses with a Water Buffalo in Africa, 1953-1954

Having just read Ernest Hemingway’s The Green Hills of Africa, I begin to understand why he shot himself in 1961. I had not read any Hemingway for over thirty years, and I realize now there was a reason for this. There was Papa H in Africa, frequently asserting how he loved the place and the people. Yet he is envious of another member of his hunting party, Karl, who is more successful in grabbing the big trophies. Even when he kills a kudu, which he has been trying to do for the whole length of the book, he has this dialog with Pop, the leader of the group, conscious that Karl has bagged a bigger kudu:

“We have very primitive emotions,” [Pop] said. “It’s impossible not to be competitive. Spoils everything, though.”

The only problem is that I didn’t believe him. Again and again, Hemingway is hyper-conscious of competing, of looking good in the eyes of his fellow hunters and his native assistants. He talks about Droopy, a native tracker:

M’Cola [another tracker] was not jealous of Droopy. He simply knew that Droop was a better man than he was. more of a hunter, a faster and cleaner tracker, and a great stylist in everything he did.

At another point, Papa talks of his “wanting to make a shot to impress Droopy.”

Hemingway, too, was a great stylist—in his own way. The prose of The Green Hills of Africa at times rises to the level of poetry. In this, he falls victim to the happiness trap, of always wanting to be happy, of always overcoming hurdles and progressing from one triumph to another. But life is not like that. One must appreciate the little things, to behave prayerfully and thankfully when he has taken the life of some splendid game, to grab at the moments of happiness that are fleeting and resolve to slog manfully through all the merde with which a life is interlarded.

3 thoughts on “The Happiness Trap”