The Serious Side of Indian Wells

California Route 14 cuts directly through the Antelope Valley and the Mojave Desert until it joins with U.S. 395 just north of Inyokern and just a few miles west of the epicenters of the Ridgecrest earthquakes. Along the side of 14 are a number of deserted motels and restaurants dating back to the 1930s. And there is also the Indian Wells Brewing Company, the manufacturers of Rocket Fizz Sodas, which, unlike the ruined properties, is very much a going concern.

On our way back to Los Angeles from the Eastern Sierras, the Indian Wells Brewing Company was the last stop on our trip. I didn’t know what to expect; but what Martine and I found turned out to be a hoot. Although the company also manufactures beers, I didn’t try them because I had to drive back to L.A. traffic stone sober. But the soda pops were a different story.

So far I have tried the Marilyn Monroe Lemonade Soda, the Rocket Fizz Pineapple Soda, and the Tyler the Kid Sarsaparilla (which was delicious). We also got bottles of the King Kong Cola, the Three Stooges Root Beer, and a Key Lime-flavored Soda, which I suspect will be just as good. Altogether, we spent an hour at their store in the desert being entertained by the wild array of amusing brand names and the wild sense of humor they exhibited. 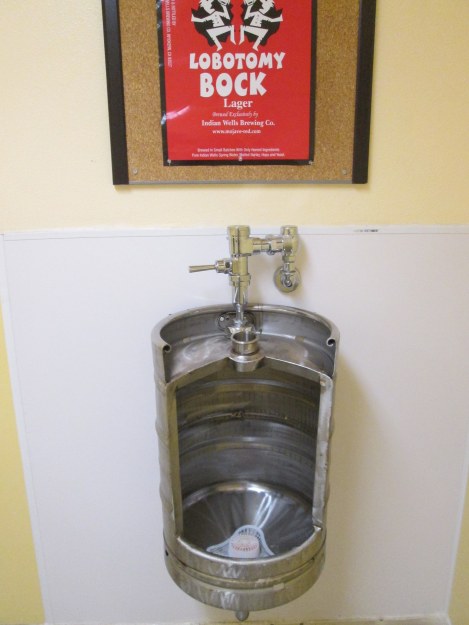 Beer Keg Urinal in the Restroom