Over the last year or so, Martine and I have been visiting many of the old adobes that were associated with the Spanish and Mexican land grants into which the arable land of Los Angeles had been subdivided. These have included:

Of these, the most spectacular have been the Leonis Adobe and Rancho Los Alamitos, both of which have substantially larger budgets and more well-developed exhibits than the others.

When one has visited a number of these adobes, a pictures emerges of an agrarian life of herding sheep and cattle and of a few widely-separated ranches, mostly far from the Pueblo of Nuestra Señora la Reina de los Angeles de Porciuncula (a.k.a. downtown Los Angeles), which was founded in 1781. In the years that followed, the map of Southern California was broken into large land grants: 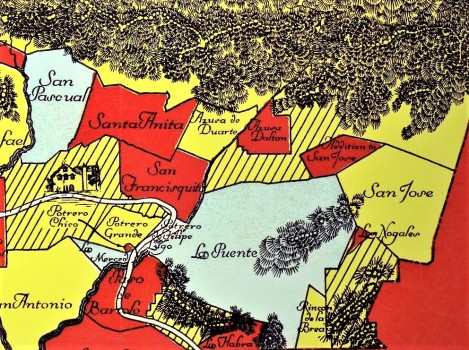 Small wonder that there are so many Spanish place names in L.A.! The land that was not part of a Spanish or Mexican land grant was either a town site, mountains, or desert.

Rancho Los Alamitos, which Martine and I visited today was surrounded by lush gardens of carefully chosen trees, flowers, and succulents.On the grounds is a deep artesian well that helped the land stay productive for agriculture for well over a century and a half.

Part of the Los Alamitos Gardens

It is also by far the most liveable of the adobes we have visited. For one thing, the original 19th century adobe structure was substantially added to. Unlike most adobes which are sparsely furnished with miscellaneous items that were never meant to coexist in the same room, at Los Alamitos we have the original furniture, library, kitchen appliances, including some pieces actually crafted by carpenter John Bixby, one of the original inhabitants.

Rancho Los Alamitos is a place of beauty which we will visit again.