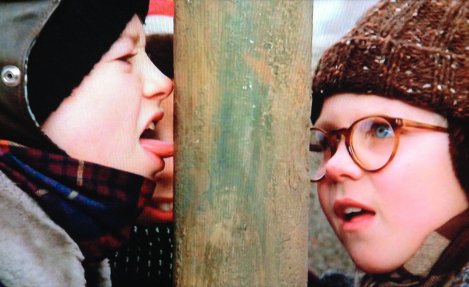 Scott Schwartz as Flick and Peter Billingsley as Ralphie

It’s refreshing that a film produced as late as the 1980s has become a legitimate Christmas classic. Seeing it repeatedly has not diminished its appeal, even when seen in bits and pieces on TV channels that played the film for 24 hours straight.

The director of A Christmas Story, Bob Clark, is a filmmaker who has not produced anything else that comes up to the standard of this, his masterpiece. I have read Jean Shepherd’s In God We Trust: All Others Pay Cash and loved it. As good as the original story was, the film was better. The direction of the actors, particularly the child actors, was as good as anything I have ever seen.

There is another reason I love the film. Although the story is set in Indiana, scenes were set on Public Square in Cleveland, Ohio, where I spent most of my childhood. I remember the Christmas parades there, and particularly the Christmas display windows at Higbee’s Department Store, which is clearly identified in the film. Other scenes may have been shot elsewhere, but most of the exteriors reminded me of Cleveland. Even Ralphie’s school looked exactly like Harvey Rice Elementary School, where I attended kindergarten and half of first grade. (I never finished first grade, but let that be our little secret.)

If I were the one scouting locations for A Christmas Story in such a way as to reflect my own childhood, I would not have done any differently than the producers of the film. That’s why every time I see this film, I am taking a trip down memory lane.