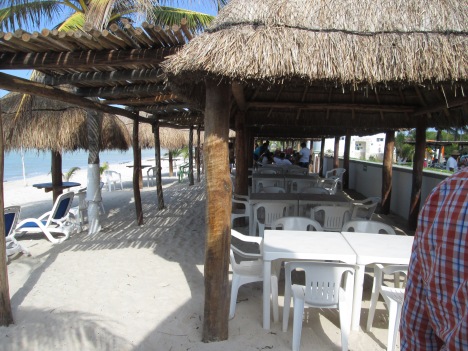 As I get older, I begin increasingly to tend toward being a vegetarian. Except where fish is concerned.

In my recent trip to Mexico, I visited three fishing ports: Campeche, Champotón, and Progreso. In each of them, at least one meal a day was dedicated to seafood, mostly filete de pescado a la Veracruzana, which consists of a filet of fish with a sauce of tomatoes, onions, and green olives. The best were at a place called something Tortuga something at Champotón, the Marganzo in Campeche, and Shark in Progreso.

I do not usually eat a lot of shellfish, though I had some excellent ceviche de pulpo (octopus) in Campeche and Progreso. Typically, I do not eat shrimp because of some bad experiences with symptoms resembling a sudden onslaught of strep throat. I usually tell everybody that is because of the mercury levels in coastal waters by large cities. In fact, I don’t know the real reason; but I do know I can eat shrimp caught in northern waters or in the Caribbean—though I usually just don’t. I have had similar experiences with lobster. 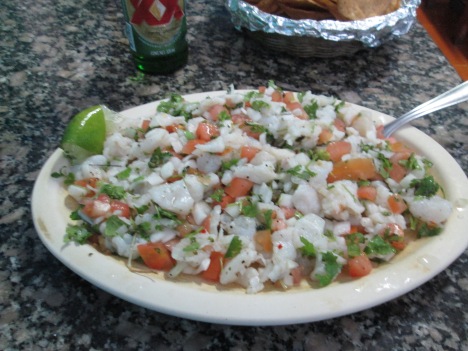 Ceviche is one of my favorite dishes. It consists of raw fish or other seafood “cooked” by marinating in lime juice and served with chopped onions, tomatoes, chiles, and cilantro, as in the photo above. The fish actually tastes cooked, though it is always served cold. I grew to love the dish when I visited Lima, Peru, where it is the lunch dish of choice, but is rarely served at dinner time.

The only other place in the world when I went crazy over the fish was Iceland. Rarely did I eat at restaurants there which were not practically in view of the local fishing fleet. And the types of fish were radically different from what I was used to.

This site uses Akismet to reduce spam. Learn how your comment data is processed.