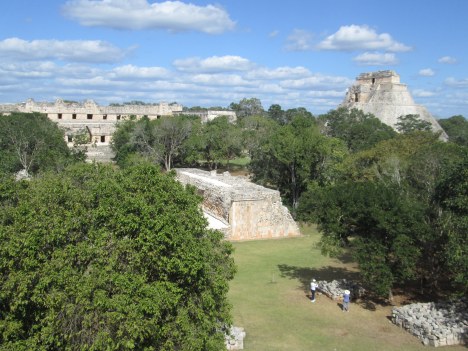 In fact, there is something about the place which calls one back. I have now visited it a total of four times, usually staying overnight at the Hacienda Uxmal Hotel and spending extra time with what I consider to be the crown jewel of Maya architecture.Over the next few days, I intend to share with you why I feel this way.

Pretty Much the Same View in 1839 as Drawn by Catherwood

On my first visit, I went on a group tour under the auspices of Turistica Yucateca in Mérida. As the tour van pulled up within sight of the Templo del Adivino, also known as the Pyramid of the Magician, I noted that he crossed himself twice. The Templo del Adivino is shown below in greater detail: 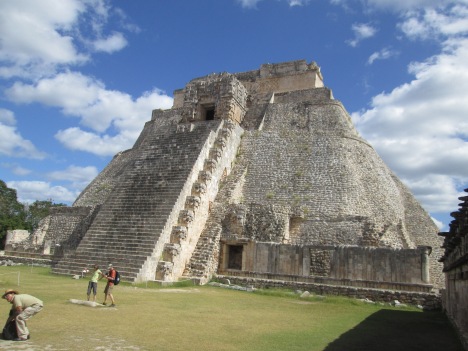 The Templo del Adivino, or Pyramid of the Magician

On previous visits, tourists were allowed to climb the pyramids, and a chain stretched from the base to the top of the Templo del Adivino to help with this. As you can see for yourself, the stairs are steep, with higher than usual risers and narrow treads. When some tourists fell to their deaths from the heights of the pyramid, INAH (the national Institute of Anthropology and History, which controls the archeological zones) began to forbid climbing the ruins. Because “boys will be boys,” some lesser and more easily scalable ruins still allow climbers—but only if the ruins are not as important as the Templo del Adivino or the Castillo at Chichen Itza.

Next: The so-called nunnery quadrangle.