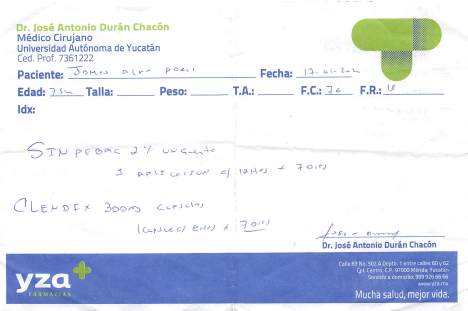 A Mexican Doctor’s Prescription for a Blistered Toe

Whenever I encounter a medical problem in my travels, I go to see one of the local doctors. This trip, I developed a nasty blood blister on my left big toe after just two days in Mérida. As I walked out of the Cathedral of San Ildefonso, I was approached by an English-speaking guide named Rafael. Although I was limping badly, I willingly took his guided tour. As it was winding down, I asked him if he could translate my English into Spanish for me to a Mexican physician. He was willing, and suggested the “Doc-in-a-Box” connected with the big Farmacia Yza on the main square.

So he and I saw Dr. Durán Chacón, a young locally trained physician, with Rafael translating. Using the bandaging, wound cleanser, antibiotic capsules, and antibiotic ointment he recommended from the Farmacia, the good doctor cleansed my wound and suggested that I bandage the toe twice a day, applying the cleanser and ointment. Three times a day, I took a 300mg Dalacin C Clindamicina capsule for about five days.

The Antibiotic I Was Prescribed

Fortunately, the good doctor’s recommendations worked; and my toe healed in record time. And it only cost me a few hundred pesos, a small fraction of what I would have had to pay Stateside.

Not surprisingly, Rafael invited me to a souvenir shop in which he was a partner. I knew I should express my gratitude for his kindness so I purchased a few nice items to take back to L.A.

Do I think he was being mercenary? Yes and no. He was a small businessman with a kind heart, and he saved my vacation from turning into a medical casualty. Again and again during my trip, I met with kindness; and I tried to express my appreciation in a meaningful way, even if it meant dispensing a few extra pesos.

One thought on “Kind Hearts and Blistered Toes”