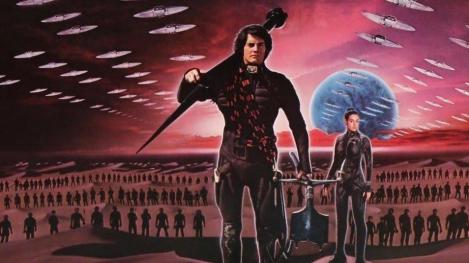 I think it is part of the human condition to fall in love with a book or song or film that one knows is not altogether up to snuff. In suchlike manner do I love the Dave Robicheaux novels of James Lee Burke, Annie Lennox and the Eurythmics singing “Sweet Dreams,” or David Lynch’s magnificent near-miss epic, Dune, based on the Frank Herbert novel of the same name.

Yesterday I saw Dune for the nth time, loving every minute of the film which its director disavowed because he did not get final editing rights. Having read the novel twice, I knew that there were unpardonable lacunae in the story, but I didn’t care. I felt that Lynch managed to get at the heart of the characters, even though he claims not to have read the book. 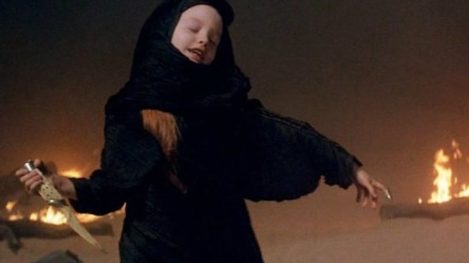 Alia of the Knife in Dune, Played by Alicia Witt

Please do not confuse my strange taste for any love of camp or any other such outmoded sensibility. The things I like about Dune are not its imperfections, but how close Lynch comes to pulling it all off.

Come to think of it, I feel that way about two other film epics directed by Anthony Mann that have received scant critical praise, including The Fall of the Roman Empire (1964) with Sophia Loren and Stephen Boyd and El Cid (1961) with Charlton Heston and Sophia Loren. Like Dune, both Mann films were vitiated by the penny-pinching producers, but had some excellent bits.

Every director worth his salt has in his filmography films that have ended up as heartbreaks. Think of Orson Welles’s whole career after Citizen Kane, the late works of Josef Von Sternberg (after his Marlene Dietrich masterpieces), Stanley Kubrick’s Spartacus, and Akira Kurosawa’s Dodes’ka-den, over which the filmmaker attempted suicide.

It seems that imperfection is part and parcel of movie-making—perhaps because it is an art form that involves large crowds of people.