Next to my seat at the kitchen table sits a stack of Lonely Planet and Moon travel guides. Of late, the top volume in the stack has been the Moon Baja guide. I have nibbled at the edges of the 775-mile (1,274 km) peninsula several times: once to Cabo San Lucas for several days, once to Ensenada for three days, once to Tijuana on a day trip, and once to Mexicali.

What begins to interest me of late is a drive on Mexica Route 1 from Tijuana all the way to Cabo San Lucas. If I went by bus, it would be a 24-hour ride. If I went by car, it would be much longer, because there are a number of towns along the way at which I’d like to stop for several days, and a number of side trips to the old Jesuit missions which are the Mexican equivalent of the Serra’s missions in my State of (Alta) California. 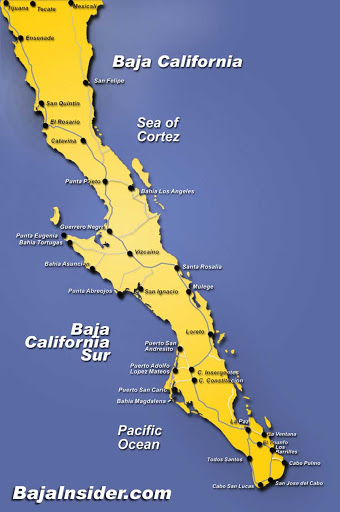 Mapa of the Baja California Peninsula

I am not much of a beach person, but I do love the desert—but never during the heat of summer. I see myself visiting missions, Indian cave paintings, taking pangas to se the Grey Whales, eating fish tacos and drinking good Mexican beer. I want to see the desert full of strange Boojum Trees (Fouquieria columnaris), which look as if they could have been invented by Dr. Seuss.

The damnable thing is that Baja is so close to Los Angeles. It would take me maybe three hours to drive to the border. I would prefer to rent a car, but I don’t like the idea of driving from TJ to Los Cabos and back again. I’ll have to see if some special arrangement could be made for me to fly back after dropping the car off.

Well, it’s maybe just a pipe dream; but it could happen.