Home » film » A Villa on Capri

This is the story of a coincidence that I didn’t realize at the time (in the 1960s), but that I learned about much later as I became more well read. I will start with the film, Jean-Luc Godard’s Contempt (in French Le Mépris) filmed in 1963. Based on a 1954 novel by Alberto Moravia, known in the English world as either Contempt or A Ghost at Noon, the Godard film tells the tale of a marriage between a writer named Paul Javal (played by Michel Piccoli) whose marriage to his wife Camille (Brigitte Bardot) falls apart as Camille is used as bait an American film producer named Jeremy Prokosch (Jack Palance). The second half of the film was shot at a beautiful villa in Capri (shown above).

In the late 1960s, I thought the film one of the greatest ever made, largely because I was so impressed by the nude body of Brigitte Bardot. Now, I no longer think of it even as Godard’s best film. For that, I would now select either Alphaville or Pierrot le Fou, both made in 1965. 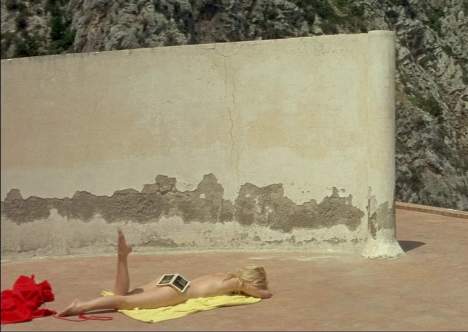 Only much later did I learn that the villa featured in Contempt was actually the villa of a great—albeit twisted—Italian writer who called himself Curzio Malaparte (1898-1957). Born Curt Erich Suckert of a German father and an Italian mother, he chose the pen name Malaparte because it was the opposite of Napoleon’s family name: Malaparte means “bad side,” whereas Buonaparte means “good side.” And he tried in his works to live up to his pen name. If you are interested in acquainting yourself with his works, I suggest you read Kaputt (1944) about the German Eastern Front and The Skin (1949) about the American invaders of Italy in Naples.

Oh, and I still think you should see Godard’s Contempt. Even after all these years, Bardot’s derrière is still capable of inspiring lofty thoughts.