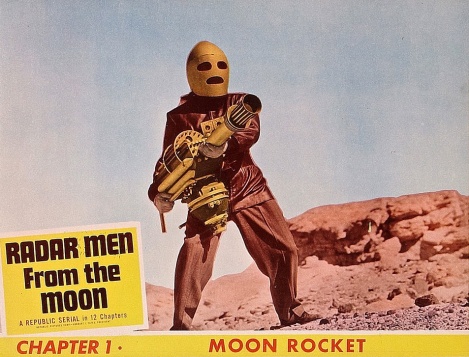 Not a Moon Monster: It’s the Hero, Commando Cody

Thanks to the ’rona quarantine, I have been seeing a lot of movies on television and on my computer. Today, I tipped the scales toward schmaltz by viewing all twelve episodes of a 1952 Republic Studios serial entitled Radar Men from the Moon. It starred George Wallace as the hero, Commando Cody. (It appears that Commando is his first name, not his title, as he is addressed by characters several times as “Commando.”) For me, however, the most interesting character is Clayton Moore, who both before, during, and after the serial played the Lone Ranger on TV with Jay Silverheels as Tonto.

Like the last film I recommended here (Carnival of Souls), Radar Men from the Moon is now in the public domain, so you can find it cheap or free. 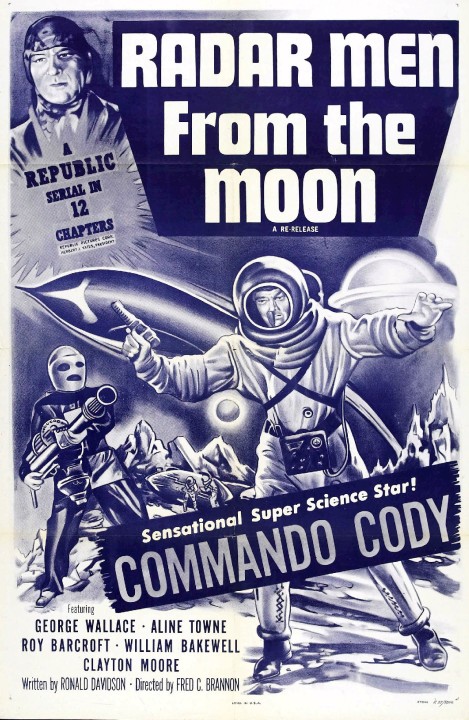 Re-Release Poster for Radar Men from the Moon

The funny thing about the serial is that just about everything the would-be moon invaders try is nipped in the bud by Commando Cody. The two failed villains are Clayton Moore as Graber and Bob Stevenson as Daly. None of the Luna-tics seem to be directly involved in anything but giving Graber and Daly new orders, which they invariably fail at.

The moon forces have some spiffy ray guns made with a better-than-uranium element called lunarium (of course) which they use to blow up trains and cause general havoc, mostly in the first episode.

If you watch this serial, you might not want to watch all twelve episodes at once, unless you are very high on something. Better to break it up into multiple sessions as it was originally intended to be seen.