If you read Martha Gellhorn’s Travels with Myself and Another: A Memoir, you should probably start with the penultimate chapter entitled “What Bores Whom?” In it, she muses about a large group of hippies staying at her hotel in Eilath, Israel’s port on the Gulf of Aqaba. The gilded youth were mostly strung out on hash, and their conversation was mostly about how so-and-so was squashed out of his or her gourd. And then, quite suddenly, we get Martha’s thoughts about travel:

Thinking of those kids at Eilath has given me a new slant on horror journeys. They are entirely subjective. Well of course. If I had spent any time analyzing travel, instead of just moving about the world with the vigour of a Mexican jumping bean, I’d have seen that long ago. You define your own horror journey, according to your taste. My definition of what makes a journey wholly or partially horrible is boredom. Add discomfort, fatigue, strain in large amounts to get the purest-quality horror, but the kernel is boredom. I offer that as a universal test of travel, boredom, called by any other name, is why you yearn for the first available transport out.

Travels with Myself and Another gives us four journeys, all of which are quite horrorshow. But they are by no means boring, though I would have given money to have stayed at home. First there was her trip with then-husband Ernest Hemingway to China in the middle of her war with Japan. That was followed up by a boat trip in the Caribbean in 1942, at a time when Nazi U-Boats were sinking hundreds of ships there. The longest chapter is about a solo trip to Africa, starting in Cameroon, stopping in Chad and the Sudan, and finally a jaunt through East Africa in a Land Rover which she drove herself. Finally, there is a short chapter about a visit to Moscow around 1972 to visit Nadezhda Mandelstam, the widow of poet Osip Mandelstam—during which she could not get a single decent meal.

Although all four of her journeys are truly horrible, the author seems to revel in her difficulties. In a way, they make her observe more clearly. And her book is a travel classic despite all the “discomfort, fatigue, strain.”

I think I will read some of her war correspondence next to see how she regards travel when she is being fired upon.

I am currently reading Martha Gellhorn’s Travels with Myself and Another. If the name sounds familiar, it’s because she was not only an ace war correspondent, but also the third wife of Ernest Hemingway. In the middle of a trip across Africa, she writes the following:

On the face of it, missionaries here are a doomed lot. They have been in Africa for over a hundred years and even if conversion to Christianity is merely a head count, I doubt they are a roaring success. I wouldn’t preach anything to the blacks, not anything at all. If they want our kind of medical care, it should be given to them, but ideally by trained black doctors, though that may disturb the Darwinian balance of their world and their lives. A child is born each year; the hardiest live. The survivors have to be strong enough to endure this appalling climate and land. Much better to teach the women birth control. But I think nothing will be taught or learned for a very long time, and I do not consider this a disaster by any means. Who are we to teach? Leave them alone is my cry; let them find their own answers. We cannot understand them and the answers er have found haven’t been anything to cheer about, for look at us….

The Nigerian novelist Chinua Achebe, author of Things Fall Apart, once wrote that the criss-cross of Africa to Euroamerica is a place of “a certain dangerous potency; dangerous because a man might perish there wrestling with multipleheaded spirits, but also he might be lucky and return to his people with the boon of prophetic vision.”

There are several people I could think of who have weathered that crossing and managed to have come out ahead in the process. Trevor Noah on Comedy Central’s “The Daily Social Distancing Show” is one such African. According to his autobiographical Born a Crime, Noah’s very existence as a mixed-race baby of South African and Swiss parentage was a violation of Apartheid at the time of his birth in Johannesburg in 1984. After his successful hosting of the 2021 Grammy Awards Show, his show biz career is looking up.

I watch his show on Comedy Central whenever I can.

One of the greatest contemporary French novelists is Marie NDiaye, who although born in France, has produced stunning body of work (My Heart Hemmed In, Three Strong Women, and The Cheffe, to name just three) that I think puts her on the track to the Nobel Prize for Literature. It’s even harder to do this in France than here in America.

Finally there is Teju Cole, born in Kalamazoo, MI of Nigerian parents. He is the author of Open City, Every Day Is for the Thief, and Known and Strange Things.I have read the first two titles and found them a revelation, the first about life in New York City, the second about life in Nigeria.

It is my belief that Africa has a lot to give us. The old Anglo-Saxon literary and artistic hegemony is in tatters, and the same goes for Europe. It is infuriating that people see the Africans as a threat. The descendants of the slaves have given us our music and excelled in the performance arts. More recent Africans continue to make this a more interesting country to live in—if only we let them! 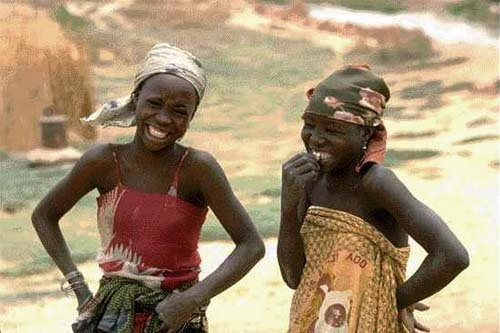 A Laughing Epidemic Swept Tanzania in 1961

Between 1962 and 1964, there was a laughter epidemic in Tanzania that started in one girls’ school and spread like wildfire around the country. The following is from the How Stuff Works website.

At a small girls’ boarding school in Tanganyika (now Tanzania), three students started to giggle. Starting and stopping abruptly, their fits would last anywhere from a minute or two to several hours. This “laughter” proved contagious — soon other girls were doing the same thing. No one could concentrate on their schoolwork, and restraining the laughing students proved ineffective. Six weeks later, more than half of the school’s middle and high schoolers had caught the laughing bug.

School officials shut the place down. But when they reopened it two months later, the laughing plague immediately restarted and the school was once again shuttered. The laughing epidemic spread to other schools and lasted somewhere between six and 18 months.

So what caused this? “The bad news is, it had nothing to do with humor. There was no merriment. Laughter was one of many symptoms,” said linguist Christian F. Hempelmann, who researched the incident. He noted that the students also had fits of pain, fainting, crying and rashes.

He blamed excessive stress for the uncontrollable giggles. The boarding school where the laughter began was a very strict one. Plus the country had just gained its independence, and people were anxious about the future. With all of the terrorism in the world today, experts say another laughing epidemic wouldn’t be surprising.

Check out this video regarding the incident:

The writer of these lines was none other than Mark Twain, whose dander was up when he learned of the mutilations and massacres in the Congo attributable to Leopold II, the King of Belgium:

In fourteen years Leopold has deliberately destroyed more lives than have suffered death on all the battlefields of this planet for the past thousand years. In this vast statement I am well within the mark, several millions of lives within the mark. It is curious that the most advanced and most enlightened century of all the centuries the sun has looked upon should have the ghastly distinction of having produced this moldy and piety-mouthing hypocrite, this bloody monster whose mate is not findable in human history anywhere, and whose personality will surely shame hell itself when he arrives there—which will be soon, let us hope and trust. [from King Leopold’s Soliloquy (1905)]

Of course, Twain had not yet seen the likes of Adolph Hitler, Josef Stalin, or Pol Pot because that was to come later.

I have just finished reading Adam Hochschild’s King Leopold’s Ghost: A Story of Greed, Terror, and Heroism in Colonial Africa. The Belgian monarch brought something new to colonialism: He designated the Congo as his personal property, making sure that all the wealth that came in went into his personal coffers. No, the Belgians did not enjoy any of that wealth directly. It went into ostentatious palaces, young concubines, and villas on the Mediterranean—all of which were his personal property. He did not even have the saving grace of being a patron of the arts. He was a patron of whatever enriched him. He even made his people “lend” him millions to develop the slave economy of the Congo. 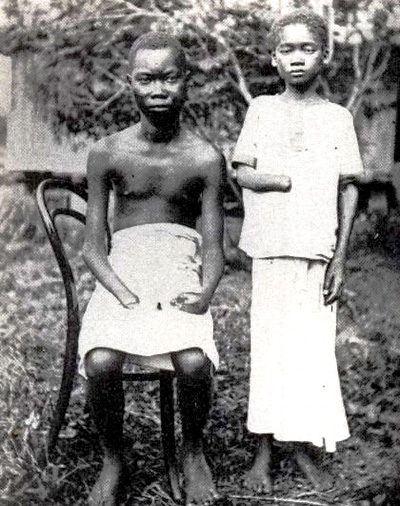 Congolese with Their Hands Cut Off

At first, the wealth of the Congo came from ivory. It was not long, however, that Leopold realized he could have a corner in rubber. Trees had been planted throughout Asia and Latin America, but would not come to maturity for a number of years. Therefore, Leopold ruthlessly turned the Congolese to harvesting rubber from the rubber trees that grew wild throughout the region. Women and children were held as hostages while their men were sent out to bring in their quota of rubber.

Woe betide any Congolese who didn’t fulfill his quota. They were killed; they hand their hands cut off; or both—and the hostages being held were likewise brutalized.

Eventually, the world caught on to what Leopold was doing—and many other European colonial powers such as France and Germany were also guilty, but not on the same grandiose scale.