In the United States, there is no single cemetery where everybody who is anybody is interred. France has its Père Lachaise and Pantheon, and Argentina has La Recoleta.

There you will find the tombs of Argentina’s presidents, including Bartolomé Mitre, Carlos Pellegrini, Domingo Faustino Sarmiento, Hypólito Yrigoyen, Julio Argentino Roca, Marcelo Torcuato de Alvear, Pedro Eugenio Aramburu, and Raúl Alfonsin. Perhaps its most famous inhabitant is Evita Perón, who is buried here under her maiden name of Duarte. Not here is the only Argentinean president most people are likely to know: Juan Perón. He was buried at Chacarita Cemetery, then moved to a mausoleum some 35 miles outside of Buenos Aires.

Walking through the labyrinthine passageways between the crowded crypts, one finds fabulous wealth (such as that of the Bullriches) side by side with neglected tombs with broken glass and crumbling plaster.

And yet, to pass eternity in this place has a high entrance requirement. Many of the tiny crypt spaces are more expensive than mansions in the more elegant parts of the city. These are the most exclusive fourteen acres in all of South America.

If you find yourself in Argentina, a visit to Recoleta is a must.

If you were born under a rock in Uzbekistan, you may not ever have heard the voice of Mel Blanc. But if you’ve ever seen a Warner Brothers Cartoon that featured Bugs Bunny, Daffy Duck, Sylvester the Cat, Porky Pig, Tweety Bird, Yosemite Sam, Foghorn Leghorn, Speedy Gonzales, Wile E. Coyote, Pepé le Pew, Marvin the Martian, or the Tasmanian Devil, you’ve heard just some of the wizardry of Mel Blanc.

Just to refresh your memory, here’s a little sample:

This afternoon Martine and I went to Hollywood Forever cemetery where many of the greats of Hollywood are buried. There you can find Rudolf Valentino, film moguls like Harry Cohn and Jesse L. Lasky, directors like Cecil B. DeMille and Edgar G. Ulmer, members of the Little Rascals like Carl “Alfalfa” Switzer and Darla Hood, and literally hundreds of Russians, Armenians, and Jews who have decided to spend a part of eternity at 6000 Santa Monica Boulevard. There is even the grave of aspiring starlet Virginia Rappe, who died of being raped at a famous party hosted by silent film star Roscoe “Fatty” Arbuckle.

But the best epitaph award clearly goes to Mel Blanc. After his death, Warner Brothers tried to find a replacement, but no one could match Melvin Jerome Blanc. He had a million voices, all of them clearly distinguishable one from the other, and they were all great. 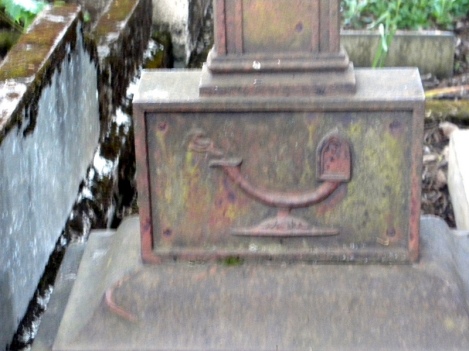 A Job for All Time

On my first day in Reykjavik on June 20, I had a challenge: To stay awake until it was time to go to bed on Greenwich Mean Time.The problem is, I started the day on Pacific Daylight Time, which added seven hours to the usual twenty-four.

By the way, there is no Daylight Savings Time in Iceland because—duh!—it’s the Land of the Midnight Sun, and it remains light at all hours.

One way I managed this was to take GoEcco’s Haunted Walk of Reykjavik. From my readings in the Medieval Sagas, I was already interested in Icelandic ghosts, so it was a natural for me. I was fortunate that the walk was given by a historian familiar with the Sagas (shown below).

Say, Isn’t That a Ghost on the Left?

One of the places we visited was Fossvogur Cemetery near the University. Our guide told us an interesting story about an old Icelandic custom:

Icelandic folk beliefs hold that the first person to be buried in a cemetery will be its ’guardian’ and that the body will not rot but serve to watch over those arriving later.  In Fossvogur the ‘guardian’ is Gunnar Hinriksson, a weaver, buried there on 2nd September 1932.

The tombstone of the cemetery guardian contains the image of a lit oil lamp as shown in the top photograph. Now, not everyone wanted their loved ones to serve as the guardian of the cemetery for all time; and, in fact, a number of people who died prior to 1932 were buried there.

Fossvogur is one of two cemeteries I visited in Iceland. The other was on Heimaey in the Westman Islands. I remembered videos of the 1973 eruption of the volcano Eldfell that showed a fall of ash and lava that covered the cemetery to a depth of several feet. It was cleaned up and is now in immaculate condition.

His real name was Béla Ferenc Dezsö Blaskó, but that didn’t sound cool enough for the title role in Universal Pictures’ new film Dracula (1931). Béla, or William as it’s translated into English, was born in Lugos in then Austro-Hungarian Empire. Now it is known as Lugoj and is located in Rumania. And, just so you know, in Transylvania, near Timisoara, known by the Hungarians as Temesvár. So Béla Lugosi is none other than William of Lugos.

By the way, his name is really pronounced BAY-lah LOO-gauche-ee, with the accent on the first syllable of first and last name.

Martine has always loved Lugosi’s acting. In fact, on her favorite sweater, she wears a metal pin of a 32¢ stamp issued in his honor, as shown below: 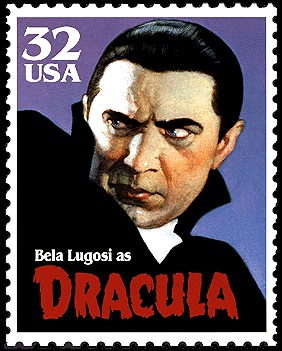 Martine has a set of DVDs for Lugosi’s films; and when we visit Holy Cross Cemetery, we always check out his grave on a hillside near a grotto.

It always surprises me how many famous people don’t have any flowers or other marks of family or fan affection by their graves. Note, however, that there is a little votive candle by the bottom right of Béla’s headstone.

Today, after doing a half day of tax work (on a Saturday!), Martine and I went to Holy Cross Cemetery in Culver City. Today is the first anniversary of the death of our apartment manager, Tony. Not that we liked him very much, but we liked his mother, who died twelve years ago; and believe that, although his son grossly mismanaged his own life, he deserves to be commemorated—not for what he was, but for what he could have been.

Once again, I thought to myself that, when it is my time to go, I do not want to be embalmed and buried—not anywhere. My wish is to have my remains cremated and dispersed, preferably in the ocean. If that’s not possible, on the surface of the earth will be almost as good.

Since we had a little extra time, we did a little Hollywood celebrity grave search. We found out where Bela Lugosi, Jimmy Durante, Rita Hayworth, Zasu Pitts, Bonita Granville, John Candy, and Fred MacMurray are interred.

Then we went to Dinah’s Family Restaurant at Centinela and Sepulveda, one of Martine’s favorite venues for fried chicken.