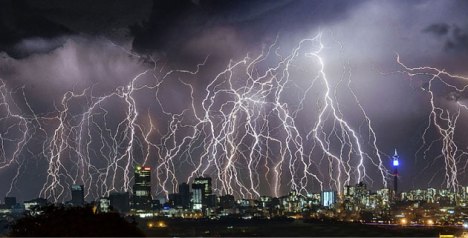 This Never Happens in L.A., Does It?

It is a well-known fact that I have become openly contemptuous of all he hoopla about this year’s El Niño predictions. Well, early this morning, we were hit by a major thunderstorm that abated just as I started dressing up to go to work. There was, in addition to the thunder, considerable lightning and rain. In Altadena, my friend Bill Korn showed pictures of his vegetable garden under a layer of fall hail.

I guess, better late than never. I wouldn’t mind seeing a few more of these storms over the next couple of months. We still need to fill those reservoirs and deepen that Sierra snow pack.

The Atacama-ization of Southern California

This was supposed to be a wet rainy season, courtesy of the strongest El Niño in years. Well, February is almost over; and we rarely get much, if any, rain in March and April. The El Niño has sent a lot of rain to Northern California, which is good, but now a high pressure ridge is setting up in the Rockies which will dry everything out and make the mercury rise. And it may result in the dwindling of the now respectable snowpack in the Sierras.

By the picture caption above, I mean that Southern California is becoming North America’s own equivalent of Chile’s Atacama Desert, where it almost never rains. I believe the last flood in the Atacama was witnessed by Noah.

In the meantime, Martine and I scoff more than ever at weather reporters. El Ninny strikes again!

Well, Which Is It To Be?

As I sit here writing this, I hake my head in total perplexity. On one hand, today was so hot that I felt my face burning off. On the other, a mega El Niño event is predicted for later this year and possibly lasting through next spring. Of course, predictors hasten to add that it wouldn’t put an end to California’s historic drought. (Sounds like nothing would, short of another Noah’s Ark flood.)

The way it looks, I will be burned by searing heat, and then drowning in an incredible flood. Will there be any transition between the two? Will there be a day with not a cloud in the sky and 120 degree heat, followed immediately by waves of heavy rain fronts? Or will it be a slow transition?

In the end, the only person who, to my mind, has ever shed light on what El Niño means is the late Chris Farley, in this video clip on YouTube.