There Is Just So Much to Remember

Last Monday, I was privileged to see a demonstration of Indian temple dancing at the Mar Vista Branch of the Los Angeles Public Library. The young woman who runs Soorya Performing Arts in Woodland Hills casually mentioned in her introduction that there are a million gods in the Hindu religion. It is possible she wasn’t exaggerating. According to the Huffington Post, there are upwards of 33 million gods in the Hindu pantheon. Another source says there are 330 million. That is approximately one god for each person currently living in the United States. Your own personal deity, so to speak.

Doesn’t that make things complicated? Now India is a very Hindu country—so Hindu in fact that Buddhism, which was born there, is more or less eradicated from the entire subcontinent. The ruling political party, the Bharatiya Janata Party, or BJP, is virulently Hindu. And yet there are 22 different languages spoken in different parts of India. With all that wild multiplicity, I have a difficult time focusing on what is essential and distinguishing it from what is relatively unimportant. If you pray to one particular god, say Vishnu, does not another god, say Prajapati, get envious and turn your earnest pleas into a curse on your family for 27 generations?

It just so happens that I am going through a period of my life which is heavily influenced by Indian vegetarian cuisine. For the last three weeks, Martine has been going through some intestinal ailment which does not allow her to eat my cooking, and what she can eat barely counts as cooking at all in my book. So I have been making some authentic spicy vegetarian curries and bhajis. Also, I am reading Eric Newby’s travel classic Slowly Down the Ganges.

Now if I become interested in the Hindu religion as well, do I risk fragmenting myself into 330 million pieces? 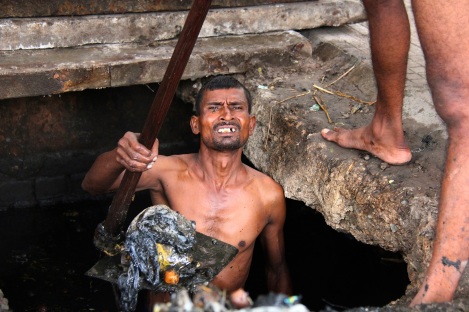 This posting is not about Eliot Ness and his war leading an FBI contingent against Al Capone and his ilk. Rather, it is about millions of lower caste Indians who are labeled by the Hindu religion as unclean by the nature of the work they are assigned—generation after generation—keeping the streets, byways, and sewers clean of the excreta of their fellow Indians.

I am currently reading a novel written by Mulk Raj Anand called Untouchable (1935), which details a day in the life of one such Dalit family. The older son, Bakha, accidentally touches a Brahmin who almost causes a riot because he accidentally touched him as he passed by in the street. Any physical contact of a Dalit with a Brahmin requires that the latter take a purifying bath. Sweepers are required to announce their presence as they walk among men so that higher caste Hindus can avoid unwanted contact.

Anand’s novel launched his career as an Anglo-Indian writer. English novelist E. M. Forster, author of A Passage to India, has penned this tribute to him:

Some readers [of Untouchable], especially those who consider themselves all-white, will go purple in the face with rage before they have finished a dozen pages, and will exclaim that they cannot trust themselves to speak. I cannot trust myself either, though for a different reason: the book seems to me indescribably clean and I hesitate for words in which this can be conveyed. Avoiding rhetoric and circumlocution, it has gone straight to the heart of its subject and purified it. None of us are pure—we shouldn’t be alive if we were. But to the straightforward all things can become pure, and it is to the directness of his attack that Mr Anand’s success is probably due.

The plight of the Dalits will always astonish those who believe the words of our own Declaration of Independence: “We hold these truths to be self-evident, that all men are created equal, that they are endowed by their Creator with certain unalienable Rights, that among these are Life, Liberty and the pursuit of Happiness.”