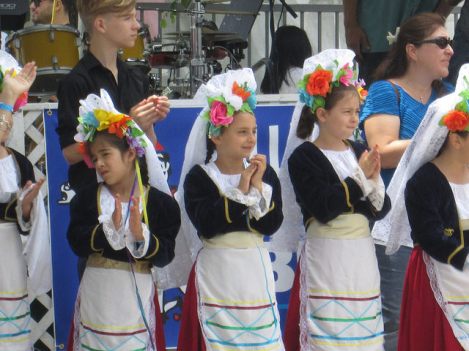 Yesterday was Scottish, today was Greek. Every Memorial Day weekend, Saint Nicholas Greek Orthodox Church in North Hills puts on a three-day Greek festival with food, dancing, and vendors. It is one of three Southern California Greek festivals that Martine and I attend. For Martine, the main attraction is spanakopita, Greek spinach and cheese pie, the baked goods redolent of honey and nuts, and he beautifully decorated church.

My preference is to see the children dancing. As they go through their steps, members of their family step forward and shower the dancers with one-dollar bills, which are picked up after the performance. And, although I was raised as a Roman Catholic, I have always had a warm spot in my heart for the Greek Church.

I sometimes wonder what will happen in the years to come as the younger generation grows more detached from the values of their parents. Many of the older parishioners still speak to one another in demotic Greek, while the children are just American kids trying to make their own way in the world. When the girls in the above picture grow up, will the old ways matter to their own children? What about the Greek language? the cuisine? even the religion?

Are we seeing the last florescence of children trying to adhere to their parents’ folkways? Perhaps not. Trumpf to the contrary, America is still seeing waves of immigrants, mostly from Asia and Latin America. As a Hungarian, I am closer to the European ethnic ways; though the Central Americans and Koreans and Persians also have a lot to offer. 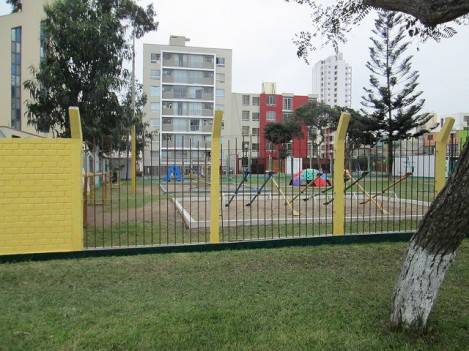 If you’ve read my blog for any length of time, you know that I love to travel. The question that many people have asked me is, “Yes, but wouldn’t you like to live there?”

The answer is very simply no. It’s not because I have any great hopes for the United States, but because I know that many of the places I love to visit have or have had insurmountable difficulties which make me think twice.

For instance, I love Iceland; but I dread the idea of six dark months out of every year in which the weak sun comes up for only a few minutes in the middle of the afternoon. And even though virtually everyone speaks English, I would probably have difficulties getting my kennitala (registration number), because officialdom likes to do its business in Icelandic.

Of all the countries I have visited, I would probably like Argentina the best. Even though my Spanish is adequate for travel, however, it would not fare too well dealing with the authorities in matters relating to housing and taxation. Also, all the South American countries I like (including Peru, Uruguay, and Chile) have had problems in the not too distant past with rightist dictators and left wing insurgencies.

We’re not quite there in the U.S.—yet!

As for Hungary, Slovakia, France, England, Scotland, Belgium, and the Netherlands—they’re nice, but I have a feeling they are just at the point of entering a bad time, what with the hoards invading from the Middle East and Africa. I just don’t see a good path around the problems they are just beginning to face.

There’s always Canada, I suppose, and I really like the Canadian people, even the Québecois, but I think I’ll stick it out in the U. S. of A. for the time being.

Not Understanding American Culture Can Be Deadly

You may recall those two Wild & Crazy guys from Czechoslovakia, the brothers Yortuk and Georg Festrunk, on Saturday Night Live. As they shimmied across the stage in search of “foxes, ” they displayed an exquisite misunderstanding what the United States was all about. In the case of Steve Martin and Dan Aykroyd, the result was comedy. In the case of Tamerlan and Dzhokhar Tsarnaev, two Chechen brothers from Dagestan, the result was death and disorder.

In the years to come, one of the greatest dangers to America will be the failure of immigrants from cultures vastly different from our own to adapt to the prevailing culture of the U.S. Even the mother returned to Russia, leaving several arrest warrants for shoplifting in her wake. The streets of America are not paved with gold. They are fraught with dangers not understood by people who have been influenced by our popular culture without understanding the particular demons that we in the States have to contend with in our daily lives.

After the Hungarian Revolution of 1956, my parents took in two sets of refugees. The first was a mother and son who thought that, now they were in America, everything would be golden. That ended badly when Feddike, the son, was sent to a juvenile correctional facility. Next was Lászlo, a young man in his twenties, who also quickly fell afoul of the law—whereupon my mother and father resolved not to take in any more refugees from the Mother Country.

I do not mean to imply that immigration is bad, but that American culture sends misleading vibes to the rest of the world. People who are not thoughtful and who think that just being on American soil is the solution to all their problems are more likely to go astray. No, they must be ready to roll up their sleeves and start working long and hard toward their goals.

The Tsarnaev brothers should be an object lesson to American officials that they have to probe more deeply than mere external circumstances when opening the doors of the henhouse to potential predators.