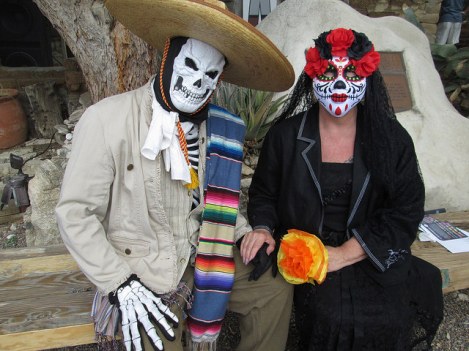 In the Catholic liturgy, today is All Souls’ Day, which the Mexican culture has enriched with its Dia de los Muertos, the Day of the Dead. The Mexican feast day is much healthier than our own Halloween: Families go to the cemeteries with a picnic lunch, which they eat by the grave of their loved ones. Years ago, I was on a bus between Mazatlán and Durango on November 2 with a number of villagers headed to celebrate. The bus was full, so I helped a young mother hold her baby from time to time as she tended to her other children.

We see death as an embarrassment, some kind of failure. Too bad, because we all die; and that death is part and parcel of our lives. We deny it at our own risk, because when we least expect it, to springs out like a jack-in-the-box and catches us all unawares. One of the strengths of Mexican culture—and I believe there are many—is that people do not try to sweep the inevitable under the rug. 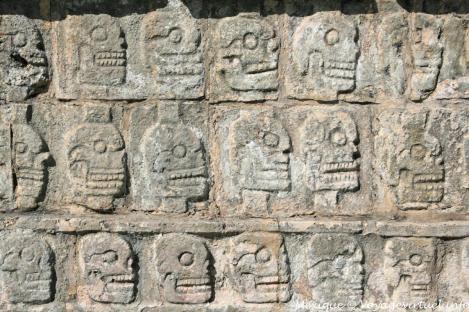 The Tzompantli, or Skull Rack, at Chichen Itza

The Aztecs and Maya used to fight wars among themselves and their neighbors for the sole purpose of capturing prisoners who were sacrificed to the gods. At Chichen Itza, there was a large platform called the Tzompantli, or Skull Rack, to hold a pyramid of skulls of these sacrificial victims. There were a number of grisly rituals connected with these sacrifices, such as cutting out the heart of victims with an obsidian knife and kicking the body down the pyramid steps, skinning the victims and having the priests wear the skins. There was even some cannibalism. Eventually, with the Spanish invasion, these rituals were suppressed; but the celebration of life’s fragility became a part of the culture.

Maybe this is what Trumpf is afraid of by these “invasions” from Latin America. He’s afraid for his own head, perhaps. They can have it. 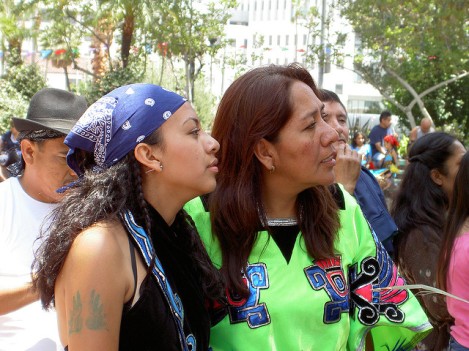 By Now, he Majority of L.A.’s Population is Hispanic

Probably one of the reasons our Presidente hates California (other than the fact that we all pretty much despise him) is that there are so many Hispanics here. And I mean Hispanics of every variety, from Mexicans and Central and South Americans to Cubans and Puerto Ricans and even a few real live Spaniards. And here in Los Angeles, we pretty much get along with one another. I mean, after all, the city was founded in 1781 as El Pueblo de Nuestra Señora la Reina de Los Angeles de Porciúncula, long before there were any gringos in evidence. It was then part of Spain, then part of Mexico, and eventually part of the United States of America, who stole it fair and square from Mexico. We even got the papers to prove it.

I remember vividly when my brother and I had our first tacos. It was in New York City, of all places, where we were attending the World’s Fair of 1964-65. We bought it at the Mexico Pavilion. The real reason I was in the Big Apple was to check out New York University’s graduate school in film. Well, I wound up not going there because I didn’t like Haig P. Manoogian, who was top man there. I don’t think he liked me very much either. (Michael Scorsese, who attended NYU, thought Manoogian was hot stuff; but then he was a filmmaker, and I wasn’t interested in making films.)

When I finally picked UCLA as the place to go, I thought I would prepare myself by buying frozen food that purported to be Mexican cuisine. It really wasn’t. In fact, it was about as bland as any other frozen food available in Cleveland. It was not until I took the train to L.A. that I encountered the real thing. And I liked it, and I still do.

I’ve lived here now for more than fifty years and haven’t been raped once. Will someone please mention that to the Tweeter-in-Chief? 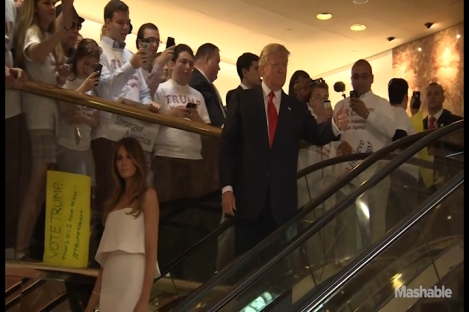 Mark That Date in Your Book of Infamy

That was the day Donald Trumpf and his wife Melania rode that escalator at Trump Tower to announce his run for the presidency. And that was the day he decided to attack Mexican-Americans and promise to build a “big beautiful wall” for which Mexico would pay:

Donald Trump kicked off his presidential bid more than a year ago with harsh words for Mexico. “They are not our friend, believe me,” he said, before disparaging Mexican immigrants: “They’re bringing drugs. They’re bringing crime. They’re rapists. And some, I assume, are good people.”

And with that speech came an injection of open racial hate into American life from a presidential candidate. The hate continued to build until only the hard core of his supporters were exempted from being called “losers.”

Alas, on that day, we all became losers. Big time. 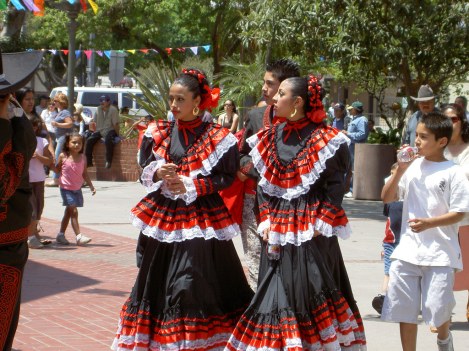 Girls, Are You Wearing Stiletto Heels?

I figure if we can get a troupe of Mexican dancers to render the Trumpf’s tiny hands inoperable by dancing on them with their stiletto heels, the people of the United States would breathe a sigh of relief. Never before has a president’s unedited prejudices gone straight from his putative brain out to the world at large without any editing.  Things have come to such a pass that I think it were best of Twitter were put out of business.

It’s not just covfefe that worries me: Trumpf and Kim Jong-Un of the DPRK are waging a constantly escalating war of threats that could take us to the brink of nuclear war. I am worried less about what Kim could do to us than what China and Russia would do if we attacked North Korea. Even now, we are sending bombers in international airspace just east of the Korean peninsula.

Our president is so out of control that no one can rein him in. Even Kelly and his other generals are helpless when Trumpf is alone at night with one hand on his cell phone and the other on the launch button.

So let’s get the Mexican dancers out there. It would be most appropriate. 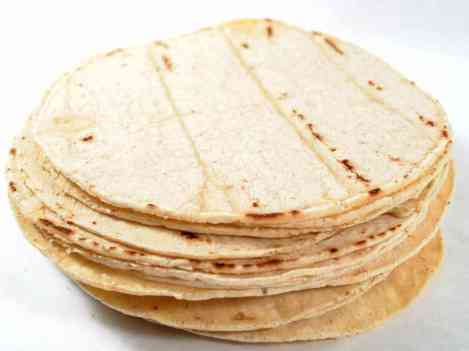 Fifty years in Los Angeles, and I’m turning into a Mexican! So many of the foods I used to like before—like rice, potatoes, bread, and gooey pastries—are now part of my pre-diabetic past. Lately, I’ve been eating a couple of tacos for lunch, preferably nopalitos (marinated prickly pear cactus) or fish with raw cabbage slaw. And for breakfast, I like to warm up some corn tortillas over a flame, roll them up in aluminum foil, and pop them in the oven. Warm them for a few minutes, and they taste great with sweet butter and a dash of salt.

I have heard it said that the sound of women’s hands rhythmically slapping the masa de maíz into little round cakes the heartbeat of Mexico. Perhaps I am developing a Mexican heart. There are far worse things in this world—though at least one presidential candidate would demur.

Apparently, the tortillas are helping my glucose readings stay lower. They satisfy my appetite without sending my sugar into the stratosphere. 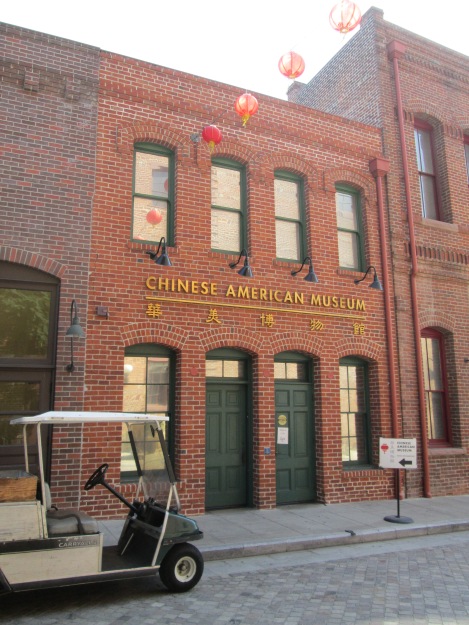 Martine hasn’t feeling too well lately, so I proposed we take a slightly low-energy visit to the Chinese American Museum. We started by eating at Las Anitas on Olvera Street, where Martine had a plain Pollo a la Plancha and a corn tortilla, while I had Chile Rellenos and Jamaica (a tasty hibiscus flower drink, pronounced hah-MYE-kah).

Then we strolled around the museum, which told of the Chinese struggle to find acceptance in a racist America. In addition to exclusionary laws forbidding more of them to immigrate, there were laws on the books forbidding them to own property or to marry with other races. This was rather difficult, as in 1852 there were 20,000 Chinese immigrants, of which only 17 were women.

Below is a photo of the replica of the Sun Wing Wo General Store and Herb Shop within the museum: 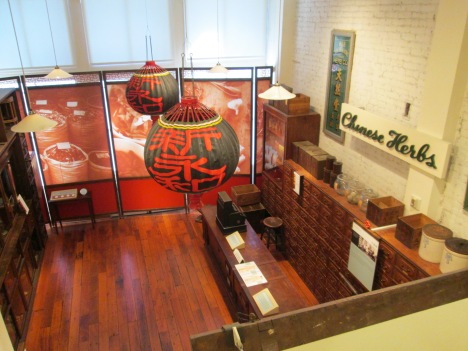