Robin Williams and Shelley Duvall Star in the 1980 Film

On Wednesday, i was delighted to find a cheap DVD of one of my favorite films from the 1980s: Robert Altman’s Popeye (1980) from Paramount. I don’t really think it’s a great film, but I find it to be a lovable one, especially for the first hour. (It kind of goes off the rails at the end.) Filming in Malta, Altman creates a whole world in the rackety port of Sweethaven. From the first scene, when Popeye arrives at the port in a wild thunderstorm in a tiny rowboat, we are precipitated into an invented world that is different from but not incompatible with the Max and Richard Fleischer cartoons of past decades. At the same time, it is a musical with strange tunes and a dance film with strange moves.

At first, Popeye is viewed by the village as an unwanted stranger. He manages to get a room in a boarding house run by the Oyl family, where he meets the daughter Olive. Shelley Duvall as Olive Oyl is perfect casting, even better (but not by much) than Robin Williams as Popeye the Sailor man. Interestingly, the story is about not only the growing relationship between Popeye and Olive, but also about how Popeye learns the benefits of swallowing large amounts of canned spinach.

Bluto is, as expected, the villain of the piece, along with the shadowy figure known as the Commodore (who turns out to be Ray Walston as Popeye’s pappy). Popeye romances Olive away from Bluto, about whom she could only say that he’s “large.”

I love to lose myself in the rich multitextured goofiness of this film. By now I have easily seen it more than ten times. 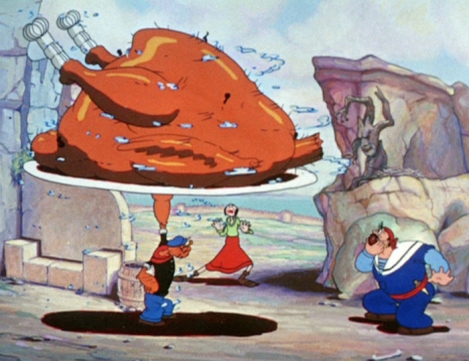 What a strange little world it is! First of all, there’s this sixtyish bowlegged sailor named Popeye. Then there’s this skinny beanpole of a young woman named Olive Oyl. Filling out the cast are the bull-necked giant Bluto the Sailor, who is always in conflict with Popeye, and occasionally the moocher Wimpy, whose great love is hamburgers, for which he will gladly pay you Tuesday.

The amazing thing is that it works. Popeye is always pushed to his limit, when suddenly he pulls out a can of spinach from his tight shirt, tears it open and, to the sound of a trumpet cadenza, swallows its contents, thereby becoming invincible and multi-talented. And, of course, successfully rescuing Olive Oyl from the leering Bluto.

Last weekend, I watched a great DVD of selected Popeye shorts put together by Steve Stanchfield of Thunderbean Animation. I was completely hooked.

I also loved director Robert Altman’s live version of Popeye with Robin Williams as the eponymous sailor and Shelley Duvall as the perfect Olive Oyl. Altman captures the craziness of the original cartoons while adding a sophisticated visual element in the ramshackle port city of Sweet Haven, ruled by a mafioso Bluto.

Both the originals—especially those made by the Fleischers—and Altman’s tribute deserve to be seen and enjoyed by unsophisticates such as myself.