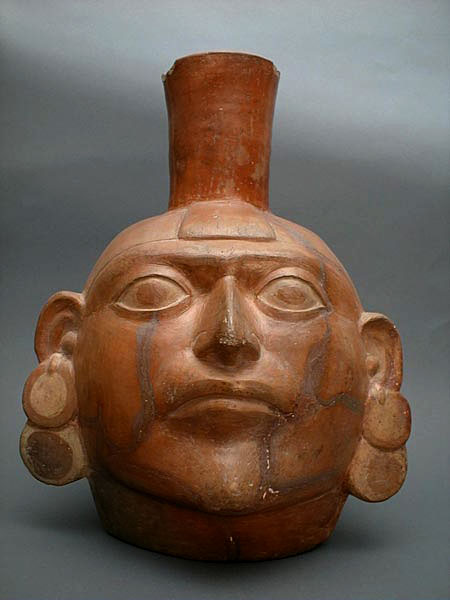 Yes, There Were Great Civilizations Before the Incas—Witness This Moche Pot

We tend to think that the only advanced Pre-Columbian Civilizations were the latest. For Mexico and Central America, that would mean the Aztecs and Mayas; for Peru, the Incas.

As one who has traveled to Mexico many times to see archaeological sites, I can vouch for the fact that, long before the Aztecs left their mythical homeland of Aztlán, there were other civilizations in Mexico that they replaced, but which they did not necessarily improve upon. The peoples who built Teotihuacan north of Mexico City did it around a hundred years before the Christian era. Then there were the Toltecs, the Totonacs, the Olmecs, and the Huastecs. I have seen remains from these and other Meso-American civilizations over a thirty-year period.

The Mayans are slightly different: They were less a centralized political entity than a people who have been around for thousands of years and lived through both empires and more localized city states and leagues of city states. The last Mayans were conquered by the Spanish at Tayasal in 1697, representing a much thornier military target for the conquistadores than the Aztecs.

Like the Aztecs, the Incas were fairly late on the scene, first coming to notice around 1438 and being conquered (but not decisively) by Francisco Pizarro a hundred years later. In many ways they were not as advanced as the Aztecs and Mayans inasmuch as they did not have writing—though they appear to have been able to use a writing system of colored knotted cords called quipus for inventories and other business purposes. (In this regard, they were like the ancient Greeks who used Linear A in a similiar way.)

What the Incas had going for them were primarily two things:

Prior to the Incas, there were numerous Peruvian civilizations who bettered the Incas in many respects. The Moches or Mochica of the north were just one example: Their pottery is far more artistic (see above photo) than anything the Inca were able to create. Then, there were the Wari, the Nazca, the Chavin, Tiwanaku, Chincha, Chanka, and Chimu.

My upcoming trip to Peru will include some visits to non-Inca ruins, such as Huaca Pucllana of the indigenous Lima culture and Pachacamac of the Ichma people. If it weren’t for the fact that I’ve never been to Peru before—and I don’t know whether I can go again—I will concentrate mostly on the Inca sites of the Sacred Valley between Cusco and Machu Picchu. 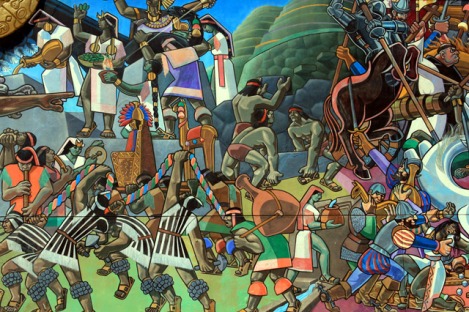 Mural of Incas and Spanish

I have read some experts that say that the Incas had possessed a form of phonetic writing with knotted cords called quipus, whereas others say that these cords were used only for inventories and such—much as the Minoan Linear A and B was used in Ancient Crete. Last night, I ran into a tale from around 1541 quoted by Peruvian writer and antiquarian Ricardo Palma, which sheds some light on the whole issue:

The time came when the first harvest of melons was taking place in the Barranca melon fields and that marks the beginning of our story.

The overseer selected ten of the best melons, packed them in two boxes and put them on the shoulders of two of the Indians serving there and gave them a letter for the master.

The two Indians had carried the melons a few leagues when they sat down to rest near a wall. As one would expect, the aroma of the fruit awakened the curiosity of the Indians and a battle began between fear and their appetite.

“Do you know something, brother?” said one of them to the other in his Indian dialect. “I have discovered a way to eat some melons without anyone finding out. All we have to do is hide the letter behind the wall. It won’t be able to see us eat so it won’t be able to accuse us of anything.”

The naiveté of the Indians attributed to writing a diabolical and marvelous prestige. They didn’t believe that the letters were only symbols but that they were spirits, which functioned not only as messengers but also as watchmen or spies. [Italics Mine]

The second Indian thought that his companion’s idea was a very good one, so without saying a word, he placed the letter behind the wall, put a rock on top of it and then the two proceeded to devour, not eat, the inviting and delicious fruit.

As they were nearing Lima the second Indian gave himself a blow to the head and said, “Brother, we are making a big mistake. We need to make our burdens equal, because if you carry four and I carry five our master will suspect something.”

“Well said,” replied the other Indian.

And so once again they hid the letter and then they ate a second melon, that delicious fruit that according to the saying is gold before breakfast, silver at noon and death in the evening, for it is true that there is nothing more indigestible and causes more upset stomachs after a full meal.

After the Indians arrived at Don Antonio’s home they delivered to him the letter that announced the fact that the overseer was sending ten melons.

Don Antonio, who had promised to give some of the first melons of the harvest to the archbishop and several other individuals, began to examine what the Indians had brought.

“What do you think you are trying to do, you good-for-nothing thieves?” bellowed the irate landowner. “The overseer sent ten melons and two are missing.” Whereupon Don Antonio read the letter once more.

“There were only eight, master,” protested the two Indians.

“The letter says ten and you have eaten two of them on the road. You over there! Give these scoundrels a good beating—a dozen blows for each one.”

And the poor Indians, after receiving a thorough thrashing, sat in the corner of the patio gloomily considering what had happened to them.

Then one of them said, “You see, brother? The letter sings.”

Don Antonio happened to hear what the Indian had said, whereupon he shouted, “Yes, you rascals. And you better watch your step and not try any more funny business because now you know the letter sings.”

And Don Antonio related the incident to his friends at the next tertulia. The saying became popular and eventually made its way to the Mother Country. 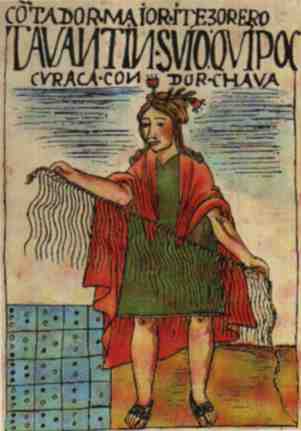 The Inca Had No Writing, Just Knots, Called Quipus

I spent many vacations between 1975 and 1992 visiting archaeological sites in Mexico. These included not only Mayan and Aztec, but also Totonac, Toltec, Zapotec, Mixtec, Olmec, and whatever peoples built the ruins at Teotihuacán. As a result, I developed a feeling for the strengths and weaknesses of these Meso-American peoples. This year I plan to visit Peru and acquaint myself with the Incas and the various peoples who preceded them in the Andes.

So far my researches have turned up some interesting results. First of all, the Incas had no writing—as such. Instead, they used colored threads of llama, alpaca, or cotton with knots tied into the various strands called quipus. We know which knots stood for the various digits in their base-10 numbering system, but have no idea how they managed to convey any kind of qualitative content, such as “Look out for that Lord Manco: He’s trying to pull a fast one on you.”

In contrast, the Mayans had a hieroglyphic language which is just now being understood, as well as a vigesimal (base-20) numbering system which is relatively easy to understand.

Whereas the peoples of Mexico had no animals they could use to either ride or carry or pull weights—remember: they did not have the wheel!—the Incas developed their own draft animals by breeding guanacos into llamas, alpacas, and vicuñas. Llamas could not bear human riders, but they could bear up to one hundred pounds of weight on their backs; and, unlike horses, they were comfortable about climbing stairs at high altitude. When fighting the conquistadores, the Inca learned to set up ambushes at places where one of their mountain roads turned into stairs. As the horses bunched up afraid to take the stairs, the Incas atop the ridge line would tumble huge rocks down upon their enemy. 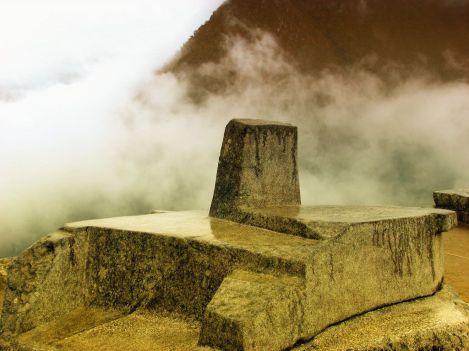 An Intihuatana, or “Hitching Post of the Sun” at Machu Picchu

Who were more advanced, the Incas or the Pre-Columbian peoples of Mexico? My feeling is that they were both remarkable. Where the Mayans excelled in writing, the Incas were great architects and built thousands of miles of roads—many of which exist to this day despite all the earthquakes that have occurred since they were built.

A good example of Inca ingenuity are the Intihuatanas, or “Hitching Posts of the Sun,” that are found at various sites, such as at Pisac and Machu Picchu. An Intihuatana was a stone that was carefully cut so that the Inca savants could note when the sun was approaching a solstice. An excellent discussion of the stone at Machu Picchu, together with angles and measurements, appears in a scholarly article by Dieter B. Hermann, which was translated into English and appears on the net as an Acrobat PDF file. The stone at Pisac was heavily damaged when a camera crane fell on it during the filming of a beer commercial in 2000. The Inca ruins can survive earthquakes, frosts, and thaws for whole centuries … but apparently not wayward humans.