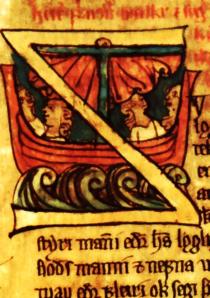 The following is a review I published on Goodreads.Com yesterday:

There are several Icelands in history. Best known is the Iceland of the Vikings, roughly from the time of settlement in the 9th century to the transfer of the country to the Norwegian King Haakon in the 13th century. Then we skip the better part of a millennium to come to the hip modern Iceland, land of the runtur and of bankruptcy.

In between those two extremes was the Iceland of poverty and servitude. The Danes took over Iceland from the Norwegians and installed their merchants, gifting them with monopolies that made the merchants wealthy, but impoverished the natives. Halldór Laxness, the country’s only winner of the Nobel Prize for Literature (in 1955), wrote Iceland’s Bell to remind his countrymen of the utter waste and fecklessness of the Danish rule. (This theme is similar to the same author’s World Light, which is set in a later period.)

Iceland’s Bell is set early in the 18th century and is presented in three acts, each with a different hero. We begin with Jon Hreggvidsson of Skagi, who is arrested for stealing a length of cord. (Apparently, the Danes, not needing fish themselves, deliberately made it harder for the Icelanders to feed themselves with the piscine riches of their island.) Things go from bad to worse for Jon, who is then arrested for murdering the hangman who whipped him for his crime. But he is let loose on the night before his hanging by …

Snæfriður Bjornsdóttir, daughter of the magistrate who sentences Hreggviðsson, is a young beauty whose hand in marriage is sought by Icelanders of the best families. Unfortunately, the fair maiden weds a drunk, though really she loves the Icelander Arnas Arnaeus, a thinly disguised portrait of Arni Magnusson, famous for collecting texts of the old Icelandic sagas and advising the Danish king how to control his subjects.

Arnaeus is a patriot of sorts, but an unfaithful suitor to Snæfriður. His belief is that the texts which he has collected, and which are almost burned in a massive fire in Copenhagen, are the source of his people’s pride and fame. It is Arnaeus who says, “A fat servant is not much of a man. A beaten servant is a great man, because in his breast freedom has its home.” On another occasion, he says, “I regret nothing that has happened, neither in words nor thoughts. It may be that the most victorious race is the one that is exterminated.”

And under Danish rule, Iceland did come close on several occasions to being utterly annihilated, from plague and smallpox; from the volcanic eruption at Lakagigur in the 1780s that led to an even more vicious plague; and starvation.

Laxness is not only a great Icelandic and Scandinavian author: He is perhaps one of the very best novelists of the Twentieth Century—period! His love for Iceland and its sad plight shows itself frequently throughout the book:

Over verdant lowlands cut by the deep streamwaters of the south hangs a peculiar gloom. Every eye is stifled by clouds that block the sight of the sun, every voice is muffled like the chirps of fleeing birds, every quasi-movement sluggish. Children must not laugh, no attention must be drawn to the fact that a man exists, one must not provoke the powers with frivolity — do nothing but prowl along, furtively, lowly. Maybe the Godhead had not yet struck its final blow, an unexpiated sin might still fester somewhere, perhaps there still lurked worms that needed to be crushed.

I have now read all but three novels by Laxness that have been translated into English. I intend to read them all, and to hope against hope that the novelist’s other work finds a translator.