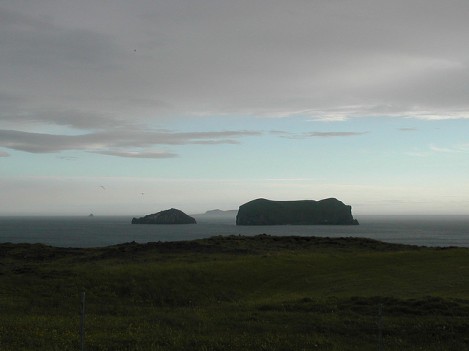 Geologically speaking, the Westmann Islands south of Iceland are brand spanking new. The most recent island in the group, Surtsey, suddenly rose up from the sea during a volcanic eruption in November 1963. Even fifty years later, access to the island is restricted to scientists and naturalists. Even Heimaey, the “Home Island” of the group, was enlarged by the world’s youngest volcano, Eldfell, which came into existence in January 1973, forcing the evacuation of the island.

As the result of a miraculous save by the Icelanders, who pumped cold seawater on the advancing lava forcing it to form an ever-higher berm that prevented the town from being more than one-third inundated. (The story is ably told by John McPhee in his book The Control of Nature.) On the other hand, two square kilometers of new land were created on the east side of the island.

The only fatality from Eldfell was a druggie who broke into an apothecary and was overcome by the fumes.

I will be spending three days and two nights on Heimaey in June. I plan to visit the Storhofdi Peninsula and photograph the puffins that congregate on the cliffs there.