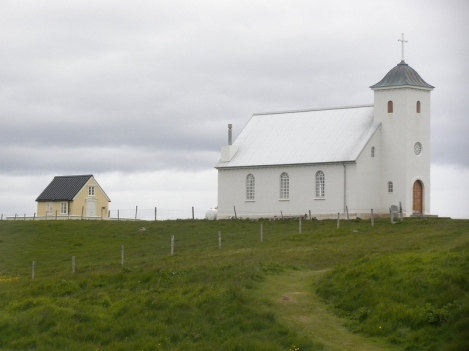 Church and Tiny Library on the Island of Flatey

In the twelfth century, there was a famous monastery on this tiny little island among many on Breiðafjörður in Northwest Iceland. It was at this monastery that the famous Flateyjarbók with its many sagas was written. Among these sagas are the ones dealing with the Icelandic discoveries of Greenland and North America, as well as many of the tales of Norwegian royalty that make up Snorri Sturluson’s Heimskringla saga.

What’s left today of that monastery? Nothing, except a single stone, which I was unable to find. I would like to think, however, that it was this stone: 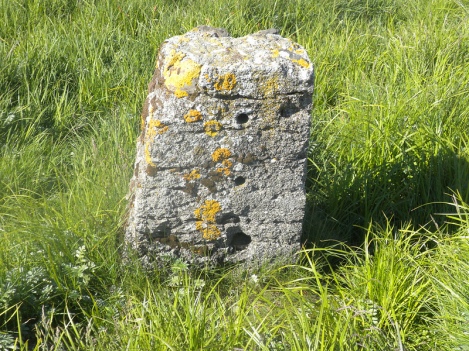 Could This Be All That Remains of the Great Monastery at Flatey?

Centuries later, long after the monastery stones were carted off to form shielings for the local sheep farmers, Flatey was a prosperous town with a large and active fishing fleet.

And today? Flatey has only four year-round inhabitants, though Icelanders from Reykjavík and the northwest of the country like to summer there. I spent the night in the old Hotel Flatey, the only one remaining, with a decided feel of the nineteenth century. (The restaurant, however, was quite excellent and up to date, with its delicious fish specials.)

After dinner, I took a walk on the tiny island in a vain attempt to look for puffins. As I left the “village,” I was immediately attacked by arctic terns for daring to venture near their nesting grounds. Terns are not particularly large, but they are aggressive and can cause painful beak punctures in the head. I had heard about them,  but did not know they were nesting on Flatey. It was only later that a hotel employee told me I should have taken a stick from a box near the entrance: Arctic terns tend to attack the tallest point of an invading person’s body, and they cannot discern the difference between a head and an upraised stick. It was an interesting experience, and a little scarey.

Overall, however, I felt a great sense of peace on this little island that once was the scene of great intellectual, religious, and commercial accomplishments—but now is just a peaceful place (except for the terns) where can stare across the fjörd at the countless uninhabited islands.

Some of the Thousands of Islets of Breiðafjörður Around Flatey

Although I had to be on the 10 a.m. ferry from the dock on Flatey, I enjoyed my evening and morning in this place that once was a bustling center and is now only a place of isolation and tranquillity.