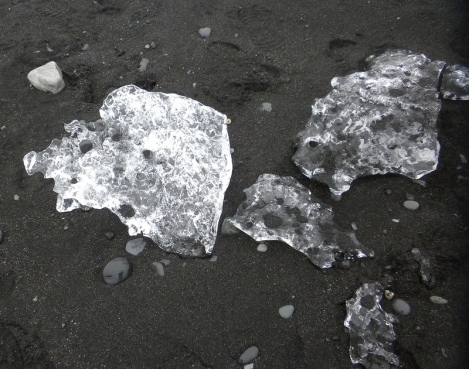 The Volcanic Sands of Breidamerkursandur with Chunks of Glacial Ice

It’s just on the other side of the road from the Jokulsarlon glacial lagoon, one of Iceland’s primo tourist destinations. But for every one hundred backpackers milling around the lagoon, only two or three walk over to where the lagoon debouches into the North Atlantic. There you will find miles of black sand dotted with the remnants of icebergs. The effect is like looking at diamonds on a black velvet background.

I first heard about Breidamerkursandur (“Sands of the Broad Boundaries”) and Skeidararsandur (“Sands of the Open Spaces”) in Katharine Scherman’s excellent 1976 book Daughter of Fire: A Portrait of Iceland. There are very few places in the world where one can find miles and miles of black volcanic sand. I am told that Sicily, around Mount Etna, is another such place.

Years ago, my French friend Alain entertained a cousin from the old country who complained about the sands of Santa Monica being tan-colored, rather than pure white like the beaches with which he was familiar. The reason for the difference was not that our sand was dirty, but rather that it was formed by the ocean beating for millenia against sandstone rather than limestone. Certain volcanic rocks just happen to produce sand that is jet black, as at the beach at Breidamerkursandur.