A Smile That Shines Across Millennia

The whole world of the smiling girl in he above photo is long gone, but her smile still speaks to us. It tells us that, even in Ancient Rome, there was something to laugh about. When I took the picture on Friday, I did not note the provenance of the figurine, but I wonder if it was Etruscan. This ancient people is the only one that has allowed itself to be depicted as wreathed in smiles—very contrary to the picture we have of the dour Romans.

Below is a hollow cinerary urn from the Banditaccia Necropolis showing a married couple, whose ashes are presumably intermingled therein: 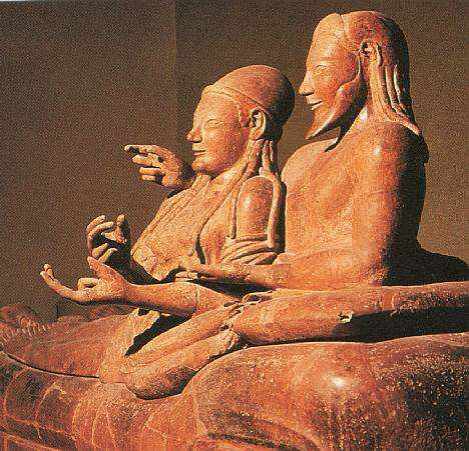 Hi, We’re Dead. Why Don’t You Come and Join Us?

I guess my little figurine is not Etruscan.Their images always show them as having sharp features and almond eyes. The girl above is definitely Roman.

Not to change the subject, but it reminds me somewhat of the following poem by Robert Browning:

That’s my last Duchess painted on the wall,
Looking as if she were alive. I call
That piece a wonder, now: Frà Pandolf’s hands
Worked busily a day, and there she stands.
Will ‘t please you sit and look at her? I said
‘Frà Pandolf’ by design, for never read
Strangers like you that pictured countenance,
The depth and passion of its earnest glance,
But to myself they turned (since none puts by
The curtain I have drawn for you, but I)
And seemed as they would ask me, if they durst,
How such a glance came there; so, not the first
Are you to turn and ask thus. Sir, ‘t was not
Her husband’s presence only, called that spot
Of joy into the Duchess’ cheek: perhaps
Frà Pandolf chanced to say, ‘Her mantle laps
Over my lady’s wrist too much,’ or ‘Paint
Must never hope to reproduce the faint
Half-flush that dies along her throat:’ such stuff
Was courtesy, she thought, and cause enough
For calling up that spot of joy. She had
A heart—how shall I say?—too soon made glad,
Too easily impressed; she liked whate’er
She looked on, and her looks went everywhere.
Sir, ‘t was all one! My favour at her breast,
The dropping of the daylight in the West,
The bough of cherries some officious fool
Broke in the orchard for her, the white mule
She rode with round the terrace—all and each
Would draw from her alike the approving speech,
Or blush, at least. She thanked men,—good! but thanked
Somehow—I know not how—as if she ranked
My gift of a nine-hundred-years-old name
With anybody’s gift. Who’d stoop to blame
This sort of trifling? Even had you skill
In speech—(which I have not)—to make your will
Quite clear to such an one, and say, ‘Just this
Or that in you disgusts me; here you miss,
Or there exceed the mark’—and if she let
Herself be lessened so, nor plainly set
Her wits to yours, forsooth, and made excuse,
—E’en then would be some stooping; and I choose
Never to stoop. Oh, sir, she smiled, no doubt,
Whene’er I passed her; but who passed without
Much the same smile? This grew; I gave commands;
Then all smiles stopped together. There she stands
As if alive. Will ‘t please you rise? We’ll meet
The company below then. I repeat,
The Count your master’s known munificence
Is ample warrant that no just pretence
Of mine for dowry will be disallowed;
Though his fair daughter’s self, as I avowed
At starting, is my object. Nay, we’ll go
Together down, sir. Notice Neptune, though,
Taming a sea-horse, thought a rarity,
Which Claus of Innsbruck cast in bronze for me!

That line about “all smiles stopped together” is grimly humorous.