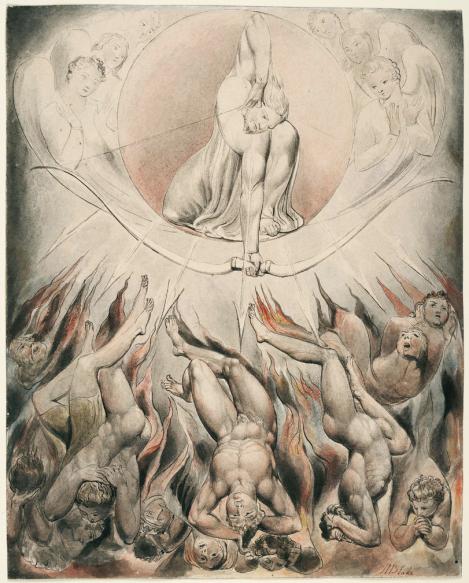 The Expulsion of Satan and His Angels from Heaven

William Blake was not only a great poet, but he was also a great artist. When I was younger, I used to think that his art was a bit clunky—until I started reading his poetry. Then I saw that both the poetry and the art were all of a piece: they were like flames from a mind and heart on fire.

It was in his greatest poem, “The Marriage of Heaven & Hell,” that William Blake wrote this line:

The reason Milton wrote in fetters when he wrote of Angels and God, and at liberty when of Devils and Hell, is because he was a true Poet, and of the Devil’s party without knowing it.

Certainly, Book I of Paradise Lost shows a Satan who is unrepentant and verging on the magnificent:

What though the field be lost?
All is not lost; the unconquerable Will,
And study of revenge, immortal hate,
And courage never to submit or yield:
And what is else not to be overcome?
That Glory never shall his wrath or might
Extort from me.

At the same time, Milton’s God is also splendid. When he hears that Satan is loose on Earth, he foresees what is to come and sends the Archangel Raphael to explain to Adam and Eve the story of the fall of Satan and his angel followers. Blake illustrates the scene thus: 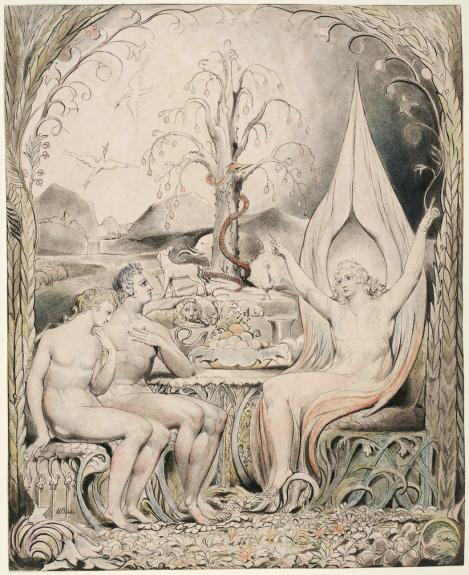 In actuality, Milton has Eve fall into a sleep while Raphael talks with Adam.

Blake’s Eden is strangely desert-like, whereas Milton gives us a verdant creation in which Adam and Eve are early agronomists who take care of the plants as part of their daily tasks. No matter, Blake is an artist in his own right and has no compunctions about creating his own Paradise Lost in pictures.