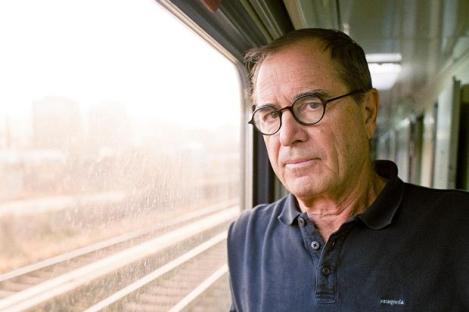 Paul Theroux on One of His Mythical Train Rides

For almost forty years, I have been traveling around the world with Paul Theroux—starting with his train ride books The Great Railway Bazaar (1975) and The Old Patagonian Express (1979) to whatever I could get my hands on. Even when I said to myself, “This guy is altogether too snarky,” I followed his adventures with an interest bordering on zeal.

Only now do I realize he is one of the great influences on my life. It was not until November 1975 that I began my own travels (other than back and forth between Los Angeles and Cleveland). My visit to Yucatán opened my eyes and was followed by trips to Britain, Hungary, Czechoslovakia, and a lot more of Mexico. It was as if the floodgates were open, and my eyes were focussed on the world at large, and not just at whatever place I was living at the time.

I have glorious memories of my trips, even the first one to Argentina, when I broke my right shoulder in a blizzard in Tierra del Fuego. I was hooked, and have been ever since.

Yeah, I Second the Motion!

A few days ago, I finished reading Theroux’s Ghost Train to the Eastern Star (2008) in which I found the following quotes which resonated with me:

Often on a trip, I seem to be alive in a hallucinatory vision of difference, the highly colored unreality of foreignness, where I am vividly aware (as in most dreams) that I don’t belong; yet I am floating, an idle anonymous visitor among busy people, an utter stranger. When you’re strange, as the song goes, no one remembers your name.

Also, it doesn’t matter any more who’s topping the charts. Taylor Swift doesn’t mean anything to me; and if Kim Kardashian’s ass were offered to me on a silver platter, I would not too politely refuse. I have climbed the Mayan pyramids at Uxmal and Chichén Itzá. I have taken a fall at Magallanes and Rivadavia in Ushuaiah and injured myself. I have visited two Communist Eastern European countries before 1989. I have seen things most people have not seen, and it has changed me forever.

It seemed to me that this was the whole point of traveling—to arrive alone, like a specter, in a strange country at nightfall, not in the brightly lit capital but by the back door, i9n the wooded countryside, hundreds of miles from the metropolis where typically people didn’t see many strangers and were hospitable and did not instantly think of me as money on two legs.

Being a traveler is being something of a loner. I am certainly that. But I wouldn’t have it any other way. I will travel as long as I can.