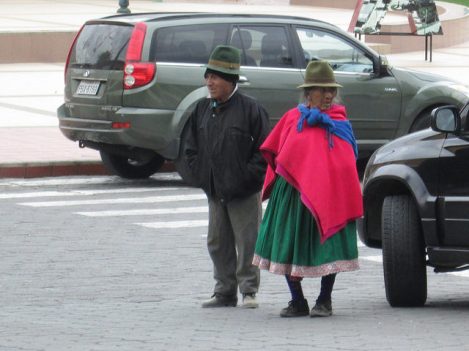 I’m not going to call them Indians because they feel insulted by the term: They are the indigenous peoples of the Andean highlands. I almost never saw them unless they were carrying babies or various other loads on their backs, sometimes obviously heavy.

The day I left Alausi, I waited at La Estación on the Pan-American Highway for two and a half hours for a bus to Cuenca. (See yesterday’s post.) At one point, a native woman who looked to be in her fifties or sixties greeted me, crossed the Pan-American Highway, and proceeded to walk straight up the hill on the other side. She was wearing cheap slipper-like shoes. There did not look to be much of a trail, and I saw her for upwards of thirty minutes while she ascended and began to harvest some tall grasses, which she put in her pack.

The Hill Across the Highway

I waited for her to come back down, but by then, my bus to Cuenca had arrived. I think it was Thomas Hobbes who said that man’s life was “nasty, brutish, and short”—and this was a woman, and not a young one at that!

The native peoples of the Andes fill me with awe.