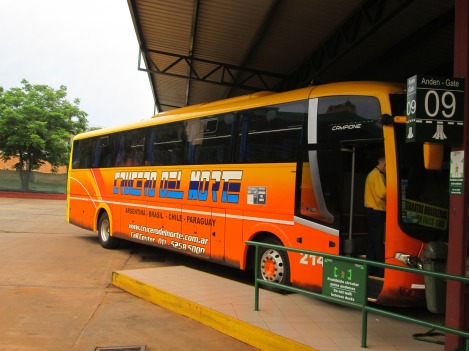 Their Equivalent of Greyhound: Better Than Us—By Far!

We like to talk big about the United States, but we are fifty years too late, or more! The one time we were reckoned to be the A-Number-One Country in the World, the rest of the world lay in ruins. Now instead of being the City on a Hill, we are more like the lopsided shitshack being dragged downriver by a flooded, polluted stream.

What brought this to mind was Martine’s story of her travels to Portland, Oregon, then Sacramento, then back to Los Angeles. Unless you are flying—and even then, sometimes—you are treated like scabby vermin. Both Amtrak and Greyhound will dig into your back with horribly designed seating. On the Amtrak dining car, you get a microwaved hamburger with pretensions to fanciness. In fact, everything on the menu has pretensions to fanciness. And it all tastes like nuked camel dung.

I remember the buses I took in South America. There was one fifteen-hour ride from Buenos Aires to Bariloche aboard a Via Bariloche tutto letto bus with seats that reclined a full 180º, with blanket and pillow.  In addition, there was a steward who served us three meals, whose price was included in the cheap ticket price. (Okay, the food was not perfect, but was adequate.) And there was a clean restroom on board. Try getting that on Greyhound!

BTW, the customer service is better, too—even if you have trouble speaking the language.

We tend to run down Latin Americans as being somehow backwards. We gringos are actually the backward ones—primarily because of our greed. When I went to pick up Martine at the Greyhound station in Los Angeles (located in Skid Row), no one knew when buses arrived. I was told to wait in the ticket line, which had something like seventy-five people plus their bags and children. I wasn’t about to spend an hour asking when the bus from Sacramento was to arrive. More greed!

It makes me want to spend more time in Latin America, even if they are rapists. At least they’re not so greedy with their people.