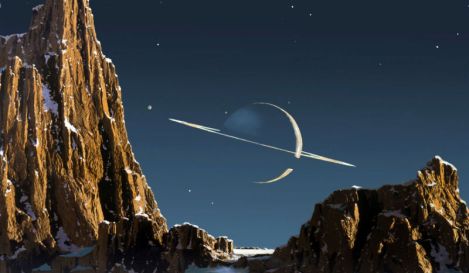 View of Saturn Seen from Titan

As I was growing up in Cleveland, I was deeply influenced by what I call space art. And by space, I mean outer space. For instance, the backgrounds in Forbidden Planet (1956) were a major influence on me. I was also influenced by the work of Father of Modern Space Art, Chesley Bonestell (1888-1986), who was born before the flight and Kitty Hawk and lived to see American astronauts walk on the surface of the moon. The paintings shown here are all by Bonestell.

According to the article on him in Wikipedia:

His paintings are prized by collectors and institutions such as the National Air and Space Museum and the National Collection of Fine Arts. One of his classic paintings, an ethereally beautiful image of Saturn seen from its giant moon Titan [see above illustration], has been called “the painting that launched a thousand careers.” Wernher von Braun wrote that he had “learned to respect, nay fear, this wonderful artist’s obsession with perfection. My file cabinet is filled with sketches of rocket ships I had prepared to help in his artwork—only to have them returned to me with…blistering criticism.”

In some cases, such as in the above painting, the image is contradicted by actual space photography, in this case from the Mars Rovers. Still, Bonestell’s painting is so gorgeous that maybe there is someplace else in the universe that looks like this.

Image of Chicago With a Dry Lake Michigan

Perhaps the work of Bonestell doesn’t do much for many art critics, but it showed me that there were more things on heaven and earth than were dreamt of in my philosophy. And in most cases, they were starkly beautiful.

3 thoughts on “The Father of Modern Space Art”