Home » reading » The Patience of Maigret

Whenever I am looking for a great crime read, my first choice is usually the late Georges Simenon, the creator of Inspector (later Superintendent) Jules Maigret. Like the author, Maigret always had a pipe in his mouth. I cannot help but think that Simenon thought of himself as his hero, but whenever I visualize the French detective, I have a different image in my mind, that of the film comedian Jacques Tati (1907-1982), Simenon’s near contemporary. (See photo below.)

I have just finished reading The Patience of Maigret [La Patience de Maigret] (1965), the 92nd Maigret in a series extending to 103 titles. Although the ones he wrote in the 1930s were brilliant, there was no noticeable falling-off with the later novels.

Maigret is in many ways the anti-Sherlock-Holmes. His cases are not solved as much through ratiocination as by a fanatical thoroughgoing diligence and its hero’s trust in the picture of the crime that emerges as a result. Near the beginning, Simenon describes Maigret going through his paces: “And yet that was how the Superintendent had succeeded with most of his investigations: climbing stairs, sniffing in the corners, having a chat here and there, and asking apparently futile questions, often spending hours in rather shady bistros.” 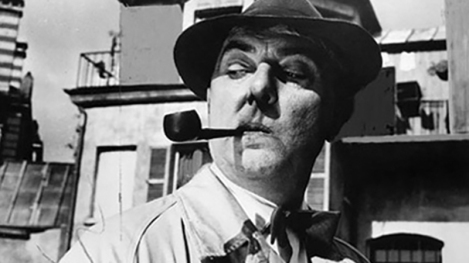 At another point, he writes: “People had a mania about asking him about his methods. Some of them even thought they could analyse them and he would look at them with bantering curiosity because they knew more about it than he, who usually improvised at the whim of his instinct.”

In The Patience of Maigret, everyone is stumped. In fact, the jewel crimes at the heart of them have been going on for over twenty years, but no one could figure out who was cutting the gemstones out of their settings in order to fence the loot. The answer comes at blinding speed in response to a comment made during a phone call to the former mayor of Douai. When that happens, Maigret corrals the guilty parties and ties everything together with giftwrap for the examining magistrates who will do the heavy lifting for the prosecution.

One thought on “The Patience of Maigret”