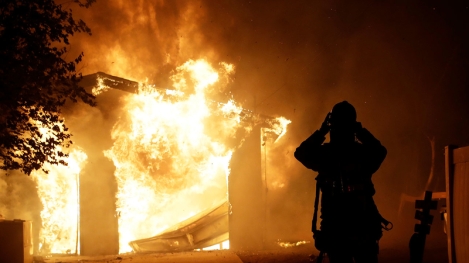 Scene from the Tick Fire

Today, as Martine and I returned from the Eastern Sierras, we passed where the Tick Fire jumped the Highway 14 Freeway and turned the wooden posts holding up the steel guardrails into a line of torches. We also looked toward the summit of a hill and saw a ruined mansion which had been burned to a crisp. The traffic slowed to a crawl as the motorists stared at the devastation—and this was just the southern boundary of a fire that had scorched 4,600 acres (1,862 hectares) as of a couple hours ago.

As we drove south, we weren’t 100% certain that Highway 14 (the Antelope Valley Freeway) was open to southbound traffic. It was only when we drove into Mojave for lunch that we were relieved we didn’t have to go by way of Tehachapi and Bakersfield to Interstate 5, which would have added more than an hour to an already long ride.

The climate change which so many nincompoops deny seems to be turning the Golden State into charcoal.

Martine and I live in the flatlands of Los Angeles, which are not susceptible to brush fires. It’s bad enough, however, to have one’s lungs filled with fine ash. It makes me sneeze so hard that I burst the capillaries in my nose and have to cope with a stubborn nosebleed.