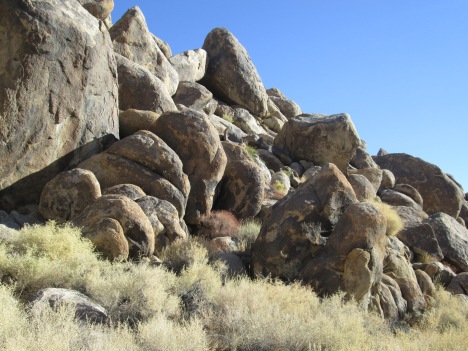 Just west of the town of Lone Pine are a strange set of foothills comprised of picturesque rounded rocks piled up for hundreds of feet or more, behind which are the tallest peaks of the Sierra Nevada, including Mount Whitney. Among these rounded rocks were shot hundreds of Westerns, not to mention horror films, sci-fi, and you-name-it. Following is a ridiculously partial list:

And the list goes on and on, including whole series of Westerns with the Lone Ranger, Jack Hoxie, Hopalog Cassidy, Randolph Scott, Tim Holt, Ken Maynard and others too numerous to mention. Not for nothing is there a Lone Pine Western Film History in town. In fact, the perfect visit to Lone Pine should include a visit to the museum (allow two to three hours) and a morning visit to the Alabama Hills, where so many films were shot.

The Alabama Hills Cafe on Post Street in Lone Pine

Actually, why not make a Trifecta out of your visit? Eat breakfast or lunch at the Alabama Hills Cafe and Bakery for absolutely delicious food lovingly prepared. On our trip last week, Martine and I ate there for three meals: one breakfast and two lunches. The restaurant is closed for dinner, and you may have to wait for a table. (If necessary, do so: It’ll be worth your while.)