In the historic center of Lima, Peru, on the Jirón de la Union, sits one of the oldest churches in South America. When I visited Peru five years ago, I would have the taxi driver let me off at the south end of the Jirón so that I could pass by the elaborate Churrigueresque façade of La Merced and wander in. When I dropped in at these old churches I frequently found myself attending Holy Mass as I was gaping at the gorgeous decorations. I always stayed to the end, out of respect for the religious orders which built such splendid edifices to worship God.

I do believe that the Spanish kings only got a fraction of the gold that was mined in the New World, and that the lion’s share went to the Church and is visibly on display. 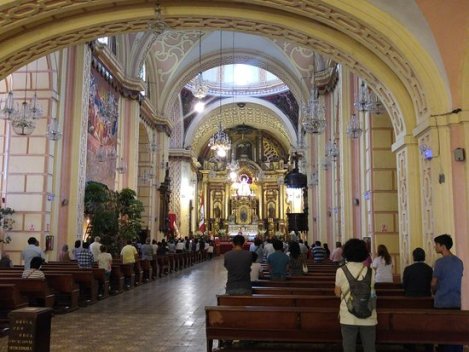 As I have said on other occasions, I visited Peru because of the Incas, but what really caught my eye were the old Catholic churches, some dating back almost 500 years. La Merced was built around 1535 by the Mercedarians, short for the Royal, Celestial, and Military Order of Our Lady of Mercy and the Redemption of Captives. In fact, if I were to visit Peru again—as I hope to—I would skip Machu Picchu and spend more time viewing the Catholic churches and their related ecclesiastical art.