Home » travel » Getting Ready for Yucatán 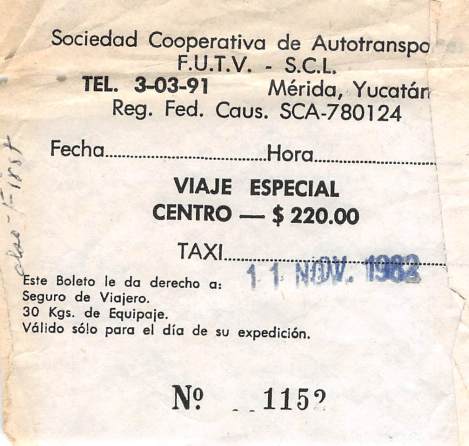 A Mérida Taxi Receipt from a November 1982 Trip

I finally settled on my date of departure for Mexico to take place around the middle of next month, though Volaris still has not confirmed my reservation. I will be flying to Mérida via Guadalajara both ways. I could have elected to transfer in Mexico City, but I have memories of a flight some thirty years ago while the passengers waited for hours for a well-connected wife of a politician to be boarded ever so fashionably late.

But then, when one travels in Mexico, one travels by Mexican rules. This involves an expectation of the unexpected, and a sharp attention paid to current circumstances, despite conflicting information from supposedly authoritative sources.

In preparation, I have been reading Paul Theroux’s On the Plain of Snakes: A Mexican Journey (Boston: Houghton Mifflin Harcourt, 2019). Ever since running into his book of a series of railroad journeys from Boston to Argentina entitled The Old Patagonian Express, I have been deeply influenced by his writings on travel. Theroux is profoundly cynical, though perhaps not so much as Tobias Smollett, whose journey of a trip to France and Italy earned him the nickname of Smelfungus by no less than Laurence Sterne.

Theroux provides a nice summary in his book about the land I am about to visit:

I have not found a traveler or commentator, foreign or Mexican, who has been able to sum up Mexico, and maybe such an ambition is a futile and dated enterprise. The country eludes the generalizer and summarizer; it is too big, too complex, too diverse in its geography and culture, too messy and multilingual—the Mexican government recognizes 68 different languages and 350 dialects.

When my best and oldest friend talks about Mexico—usually disparagingly—he really means the border regions, where the drug cartels, police, and army are the major players.  I myself have visited several Mexicos: