Home » vacation » Splashing Out at Uxmal 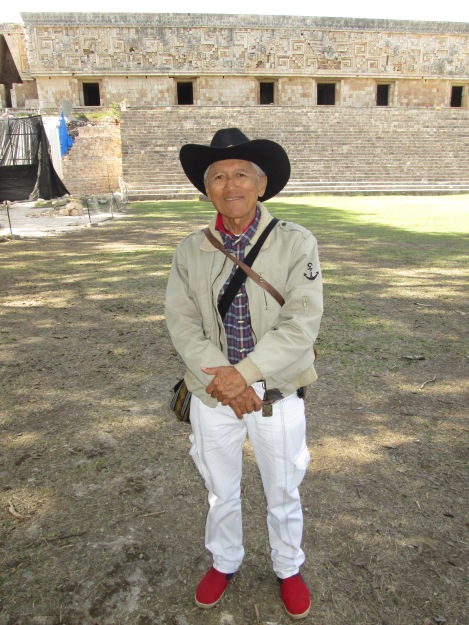 My Guide, Jorge Mex, at the Governor’s Palace

At the key Maya ruins I visited, I hired a guide all to myself. It only cost a few hundred pesos for an hour or two, and it was worth it for the quality of information conveyed.  At Uxmal, I sought out and hired Jorge Mex (pronounced Mesh), who had been recommended to me by Valerie Pickles, a hotelier at Santa Elena. I could have joined a group tour with a large crowd of ignoramuses who didn’t know the first thing about the Maya, but to have the time of someone who worked with the archeologists at digging and restoring the ruins is worth the extra cost.

As I said before, this was my fourth visit to Uxmal, but it has always ranked first with me; so it was worth the extra effort. At Chichen Itza, I was my own guide: Although Chichen is a spectacular site in many ways, I was less interested. 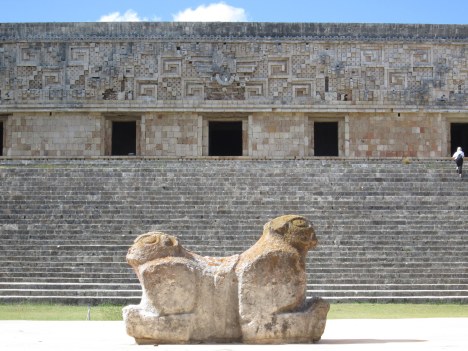 Although there was a structure at Uxmal called the Governor’s Palace, there was no governor. There was, however, a king who ruled at the time the Palace was built: His name was Chan Chak K’ak’nal Ajaw. Curiously, none of the other god/kings of Uxmal are known by name, according to Robert J. Sharer and Loa P. Traxler’s authoritative The Ancient Maya (Sixth Edition). Unfortunately, the glyphs at Uxmal have been badly weathered. 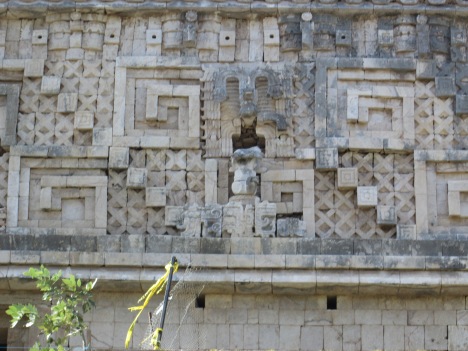 Details of Carved Stones on the Governor’s Palace

Notice the square stones at the bottom of the above photo. They are characteristic of the Puuc (pronounced Pook) style of architecture. The word puuc in Maya means “hill.” The Puuc region included some five or six sites that were in the hill country in the south of the State of Yucatán, ranging up to six hundred feet (183 meters) above sea level. This made access to water for drinking and growing crops a bit of a problem, as the underground river system of the peninsula was too deep, and there were no nearby cenotes (sinkholes) allowing access to the water.

One thought on “Splashing Out at Uxmal”