Detail of the “Nunnery Quadrangle” by Frederick Catherwood

The names ascribed to Maya archeological structures has almost nothing to do with their real function, which is mostly unknown to us. The names were assigned by the Spanish or local Maya who were in many cases a thousand years from having inhabited the ruins. Most of the great Maya cities were abandoned around the Ninth Century A.D., and Uxmal was no exception.

By the time John Lloyd Stephens and Frederick Catherwood visited in 1839, the various names were already in use, such as the Templo del Adivino or Pyramid of the Magician, the Nunnery Quadrangle, the Palace of the Governor, and so on.

One of the Buildings of the Quadrangle Today

So if you think there were a bunch of Maya nuns running around in the quadrangle of buildings that bears their name, you can forget about it. I am sure that some twelve hundred years ago, the local residents knew exactly what function every public building served. But we will likely never know.

The buildings have various themes carved in the area above the doors, including snakes, masks of the rain god Chaak, geometrical designs, and even a typical residential Maya hut of recent vintage. There are even a few very worn hieroglyphs which commemorate various dynastic events about which we know very little. 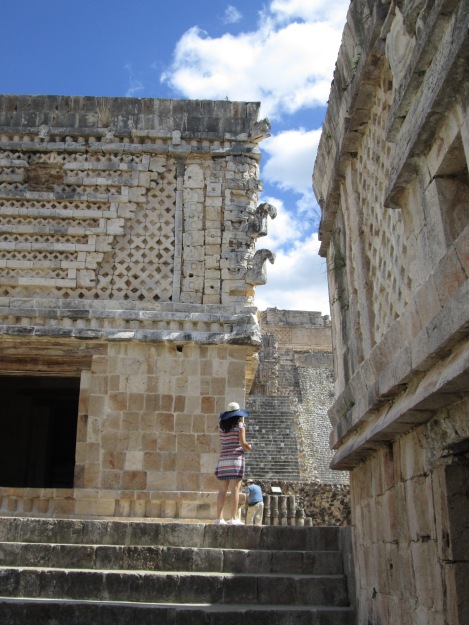 As I wrote in my previous post entitled “The Crown Jewel,” I regard Uxmal as the greatest of the Yucatec Maya sites because of the excellence of the architecture and the care with which the structures have been restored using the mostly original stones. I remember on my earlier visits seeing piles of carved stones which the archeologists of that time had not yet decided how to use. Now there are fewer of those piles lying around.

Next: The Palace of the Governor

One thought on “Maya Nuns?”