A Strange Film That Appears To Be in the Public Domain

Let’s face it: There are precious few independent feature films shot in Lawrence, Kansas (oh, yes, with some scenes shot in Utah), that are worth seeing. I think I can venture to say that Carnival of Souls (1962) is an exception. The director, Herk Harvey, did not make any other feature films; and the radiant star, Candace Hilligoss, was only in a few other unmemorable productions.

If you have ever read Ambrose Bierce’s dreamlike short story “An Occurrence at Owl Creek Bridge,” you will find that Carnival of Souls is oddly familiar in its own way. It begins and ends with a fatal auto accident with the implication that the whole story is a kind of fantastic dream.

Mary Henry (Candace Hilligoss) is the sole survivor of an auto accident in which a car goes off a bridge into the river, killing two of the three riders within. Having no memory of what happened, she checks in at a Salt Lake City Hotel where she runs into a number of strange individuals who are attracted to her. One of them is played by the director (Herk Harvey) as a kind of zombie figure. She is drawn to an old abandoned pavilion, shown in the photo below. 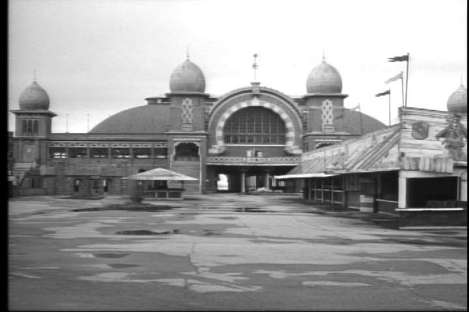 The Saltair Pavilion in Utah

The film ends as she runs away from the pavilion, pursued by shadowy figures. Her footprints suddenly disappear. Cut to the auto accident, in which there are now three fatalities, including Mary Henry.

It’s fairly cheap and easy to obtain a DVD of Carnival of Souls, as it appears to be in the public domain. Also, it is available free at present to members of Amazon Prime. I think it’s worth seeing if only to see the beautiful Candace Hilligoss, with her high cheekbones. the sole contribution of Huron, South Dakota to the art of film.