That, Amigos, Is The Pacific Ocean

According to Luis, the boatman on my little navigation of Cabo San Lucas’s harbor, that rock on which the seal is stretching is the official border between the Pacific Ocean and the Sea of Cortez (a.k.a. the Gulf of California). What I find interesting is that where the seal is pointing, toward the Pacific, is mostly too rough for swimming because of riptides and undertows. To the right, the Sea of Cortez, is much friendlier to human swimmers. As for the seal, either body of water is just fine.

To the right of the rock, in the background, is Playa Médano, the primo swimming beach in the area. Martine and I were on the Pacific side, at Playa Solmar.

While I am on the subject, I would like to recommend one of John Steinbeck’s greatest and least read works, The Log from the Sea of Cortez (1951), about his journey from La Paz with his oceanographic expert friend, Ed Ricketts. The current printed edition contains a eulogy to Ricketts which is worth reading. Another book about Baja, which I have not yet located, is by Max Miller (not to be confused with the British comedian), who served as the waterfront reporter for the old San Diego Union back during 1920s and 1930s and came out with a minor classic called I Cover the Waterfront (1932), which was made into a movie. In 1943, he wrote a book about Baja California enitled The Land Where Time Stands Still.

Of course, Baja is no longer the land where time stands still. That is because, as Porfirio Diaz said about a century ago, “Poor Mexico, so far from God and so close to the United States!” 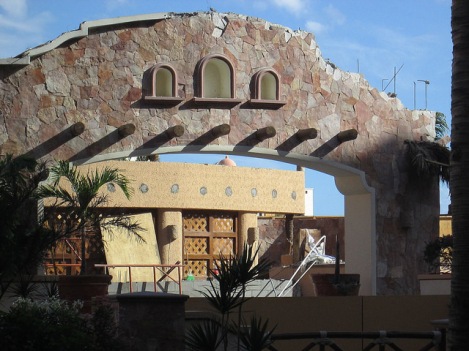 Damage to the Calima Restaurant at the Playa Grande Hotel

While I was in Arequipa, Peru, Hurricane Odile roared into Baja California Sur on September 14, 2014, causing over a billion dollars in damage. Los Cabos was hit particularly hard, with multiple evacuations and widespread damage to the power grid. When Martine and I were there last week, we saw a lot of construction going on, such as to the Playa Grande’s Calima Restaurant (above); but we were surprised that the city was over 90% open for business. In San José del Cabo on the way to the airport, we saw a few collapsed buildings. In no way were we personally inconvenienced by the aftermath of the storm.

The Storm on September 14—Directly Over Los Cabos

The resorts on the southern tip of Baja are a major moneymaker for the Mexican government. It was good to see that the resources were allocated to get tourism back on its feet in record time. When the local police were found looting damaged buildings after the storm hit, Peña Neto sent in the elite  Policía Nacionál, better known as the Gendarmería, to keep order until the region was back on its feet. They were still there as of last week, and are expected to remain for several more months.

I first learned of the term from the manager of the Whalers on the Point Guesthouse in Tofino, BC Canada. A large group of young women from Vancouver had just arrived and took over the pool table with an ample supply of alcohol, most of which they had already ingested.They screamed “Whoo! Whoo!” each time someone pocketed a ball, or even if someone didn’t. At least they were getting a lot of attention. (Though I think they didn’t want my attention, as I was ready to make them swallow their cues.)

Well, Martine and I saw lots of them in Cabo. They were making as much noise as the young men playing Tequila Volleyball at the Playa Grande Hotel. I guess the theory is that, if you make a lot of noise, you will get the attention of the equally shitfaced young men and maybe hook up with them at the nearest vomitorium. They certainly seemed to deserve one another.

Fortunately, when they did re-unite with their screaming male counterparts, they tended to repair to the upper floors of the hotel, from which we no longer heard them. I think the proprietors of the hotel assign guests of a certain age to certain rooms which take the brunt of their partying and localize the disturbance level.

We were not greatly troubled by them. At one point, however, when I saw a bunch of loud partyers on a fifth floor balcony, I shouted out for them to jump. They chose not to take my advice.

From our hotel room at the Playa Grande we would hear raucous male chants every afternoon around 2:30. There was “GO! GO! GO! GO!” followed by animalistic grunts of the Tim Allen variety. I decided to get to the bottom of this, so I ventured forth in fearful anticipation of some giant iguana surrounded by young men armed with spears. But no, it was only Tequila Volleyball, a daily event sponsored by the Playa Grande in which two teams of men were fed with free tequila and launched into a pool with a net across the middle. A cute señorita sporting a referee shirt and whistle threw out a volleyball, and the gladiatorial combat would begin.

What did I expect? Cabo is a party town, and here I was, a dour Puritan who was only trying to read a biography of Alan Turing, progenitor of the computer, assailed by misguided darts of raw testosterone. Naturally, I retreated to the cover of my room until order was restored.

We just returned from Cabo San Lucas a few hours ago. It was everything I hoped it would be: I got a good rest just before the rigors of another tax season. For Martine, it was not so good. She was so frightened of getting traveler’s diarrhea that she was overcareful of what she ate and drank. Also, her problems with sleep came down to Mexico as part of her luggage. I tried my best, but some other solution will have to be found for her. I suspect the ultimate solution for her as-yet nameless ailment will be either chiropractic of acupuncture. AMA-style medicine just gets her into trouble with bad prescription drug reactions. Getting her to agree to either will take some doing.

Fortunately, we stayed at a nice resort on Solmar Beach called the Playa Grande Resort & Spa. We ate most of our meals there, making occasional forays into town to have great seafood dishes for which Cabo, as a fishing town, is famous. 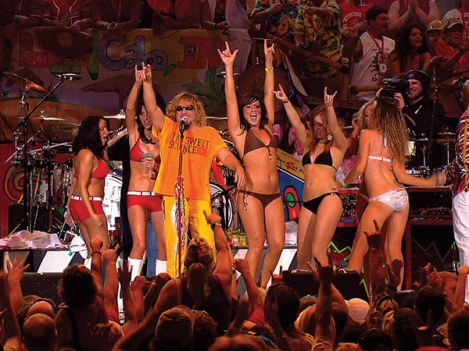 If You Can See Me in This Picture, You Need New Glasses!

No, I won’t be partying with Sammy Hagar at his Cabo Wabo Nightclub, nor will I be surrounded by lissome bikini beauties unless I drop my wallet. My Cabo San Lucas will be a strange kind of bookworm’s holiday, with a few jaunts to reassure myself that there is indeed an autentico Mexico behind all the alcoholic frippery.

Martine and I will be well away from the Marina bar scene. In fact, I think we will be far enough away from the center of town to require either a bus or taxi. While twenty-somethings are wasting themselves on cheap alcohol, I will be reading books and listening to a program of Jazz and Classical music stored on my Sansa MP3 player. This is how bookworms travel.

Unless I can latch onto a computer in Cabo, I’ll catch up with y’all on Saturday or Sunday. Until then, hasta la vista!

Next week, Martine and I will be flying down to Mexico’s Cabo San Lucas for a few days on sun and relaxation—before tax season begins in grim earnest. Around Thanksgiving, I found a good combined airfare/hotel rate from Tripadvisor that will save us several hundred dollars while giving us four nights in a beachfront suite at the Playa Grande hotel.

Neither of us have been to Mexico since 1992, and that was to Yucatán, where Martine encountered the predacious Caribbean mosquito. This time, we are going to visit the Southern tip of Baja California, which is all mountains and deserts swept clean by Westerly winds.

It appears that Martine’s traveling muscular aches are less of a problem which she is exposed to sun, of which there is plenty at the Capes. I will get a little sunshine myself, as well as reading even more books.

During that time, I may or may not post to this blog depending on the availability of computer resources as well as free time.