For me, 2019 has been the year of noir—both film noir, and somewhat less markedly, noir literature. I have just finished reading the New York Review edition of Elliott  Chaze’s 1953 novel Black Wings Has My Angel.

In my Goodreads.Com review of the novel, I quote this incredible passage from page 35:

After all, no matter how long you live, there aren’t too many really delicious moments along the way, since most of life is spent eating and sleeping and waiting for something to happen that never does. You can figure it out for yourself, using your own life as the scoreboard. Most of living is waiting to live. And you spend a great deal of time worrying about things that don’t matter and about people that don’t matter and all this is clear to you when you know the very day you’re going to die.

I wondered in my review why, after attaining a dominant position in the world after World War Two had crippled most everyone else, and after years of growing prosperity, the pessimism of noir became such a persistent theme in literature, film, and even art (q.v. Edward Hopper’s “Nighthawks”).

The best film noir productions I have seen in the last twelve months include (in the order I have seen them):

More than half the films were viewed on the TCM channel’s excellent “Noir Alley” series hosted by movie scholar Eddie Muller.

Although I consider myself an auteurist critic, I included the directors’ names in the list because of how widespread film noir productions were, especially in the postwar period, coming from a variety of studios and many different directors. Many were produced on shoestring budgets and sneaked through even though they were opposed by many studio heads, such as Louis B. Mayer of MGM.

Later this week, I will present a list noir writers who were partly responsible for the film trend. 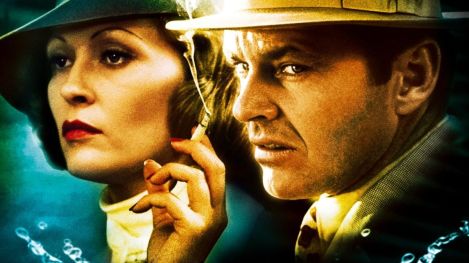 I have always loved film noir, a uniquely American genre that reveals the dark underbelly of life in the U.S. It gets particularly interesting when that revelation is from a foreign filmmaker who succeeds in seeing us for what we are. And, of course, although he is a great film artist, Polanski has been driven from our shores for statutory rape several years after his lovely pregnant wife, Sharon Tate, was mutilated and murdered by Charles Manson’s followers.

Last night I saw the unrelentingly vicious The Sweet Smell of Success (1957) with Burt Lancaster and Tony Curtis, directed by a Scotsman—Alexander Mackendrick—known mostly for such British comedies as Whisky Galore, The Ladykillers, and The Man in the White Suit. Tonight, after a long absence, I saw Chinatown (1974), one of the greatest (and last) noir masterpieces. 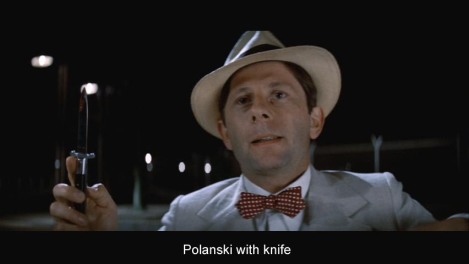 Director Roman Polanski in a Bit Part as a Thug

The film presents us with a conundrum about the strange murder of L.A. water commissioner Hollis Mulwray. Detective Jake Gittes (Nicholson) is hired by a woman posing as Mrs Mulwray to find the woman that her husband is seeing on the side. It turns out that the real Mrs Mulwray (Dunaway) did no such thing. But Gittes begins to uncover so many weird secrets relating to water delivery and real estate chicanery that the ultimate secret finally starts to make itself known. Film director John Huston as multimillionaire Noah Cross plays a pivotal role in pushing the film to its shocking conclusion.

We do not usually encounter a hero who is forced to submit to raw, naked power the way that Jake Gittes is forced to; and that is a more European contribution from the film’s Polish director. We are used to seeing our film heroes prevail against insuperable odds. Of course, that doesn’t usually happen in real life.

Chinatown is a film worth seeing many times. After all these years, I am only now beginning to understand it. 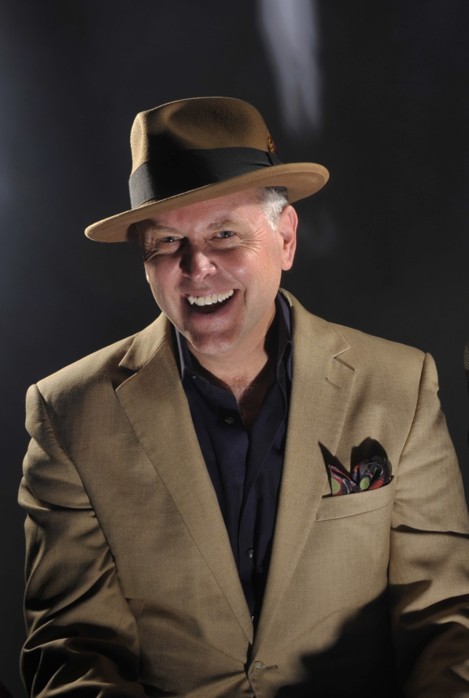 Of late, I have become addicted to TCM’s Noir Alley, which screens Saturday at midnight and Sunday at 9 am (both times Eastern). It was my friends Alain Silver and James Ursini who introduced me (and most Americans) to the genre with their books on the subject. Now that I am retired, I have pursued the subject on my own, both in films and literature. Eddie Muller, host of Noir Alley, shows an interesting array of noir films and provides excellent introductions and background info—when he is not plugging wines for the TCM Wine Club.

Last night, for example, he screened Too Late for Tears, a 1949 United Artists film on how the prospect of money can warp one’s thinking and emotions. Directed by Byron Haskin, the film stars Lizbeth Scott, Dan Duryea, Arthur Kennedy, and Don DeFore. Although the film tanked when it was first released, it is worth a second look; and now that a restored print has been created by the wizards at the UCLA Film Archive, such a second look is now possible. 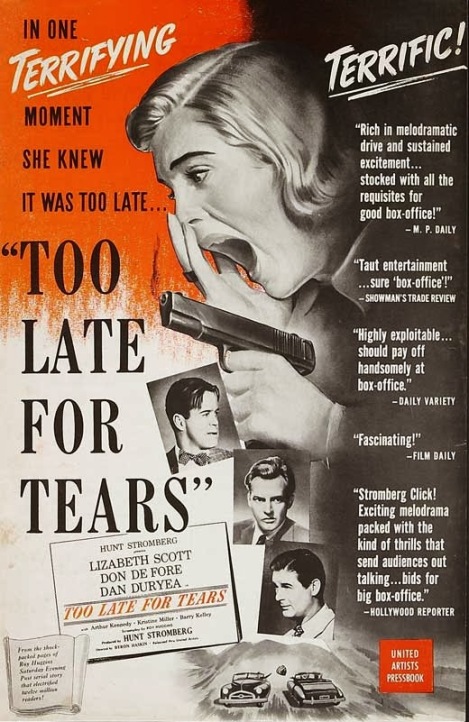 Aside from Too Late for Tears, the noir films I have seen on Noir Alley in the last few months have included, in the order I’ve seen them:

Many of the films shown are pictures you’ve probably never seen or heard of, yet all are interesting explorations of the underside of the American psyche. I look forward to seeing what Muller selects from week to week. 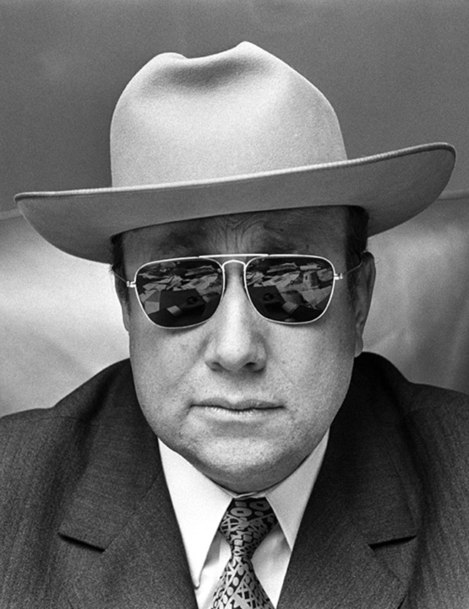 You have to admit it: He looks like an American. But he comes by it honestly. Not only is he a hero of the French Resistance during the Second World War, but his code name was Melville, based on his love of Herman Melville’s Moby Dick. His real name was Jean-Pierre Grumbach, born an Alsatian Jew in Paris; but he signed all his films as Jean-Pierre Melville.

I have seen four of Melville’s thirteen films. Although the French New Wave of the 1960s resulted in a publicity windfall for Jean-Luc Godard, François Truffaut, and Alain Resnais, there were many French directors who never became quite so well-known across the Atlantic. Jean-Pierre Melville is one of them. Others include Jacques Becker, Jacques Rivette, and Claude Chabrol.

Two Men in Manhattan (Deux Hommes dans Manhattan) is like a Valentine dedicated to New York City at night. A newsman for Agence France Presse in New York is told to investigate the non-appearance of a French diplomat at the United Nations. Moreau (played by Melville himself) looks up his paparazzi friend Delmas. Together, they search for three known past girlfriends of the diplomat, including a Broadway actress, a jazz singer, and a stripper. They even visit a high-priced prostitute known to favor diplomats. When they find that he has died in a girlfriend’s apartment, a conflict erupts when Delmas sees the potential for selling photos that show his death to have been a squalid one. It turns out the deceased was a hero in the Resistance, and Moreau’s boss wants the negatives of the pictures Delmas took. 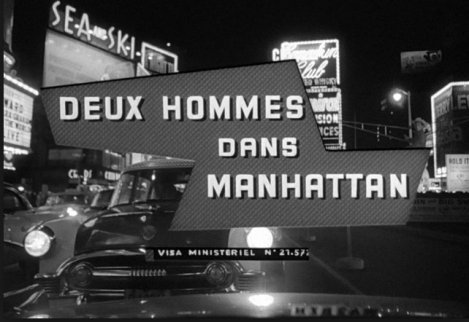 In no American film of the period have I seen such beautiful scenes of night-time Manhattan. The exteriors in this film are lovely, and the scuttlebutt is that Melville shot them himself. If so, I would regard it as high on the list of the best noir films, irrespective of country of origin.

If you should rent the DVD, I suggest you also watch the extra footage of a conversation between Jonathan Rosenbaum and Ignatiy Vishnevetsky, two knowledgeable film critics who provide excellent background to the movie and Melville’s career. 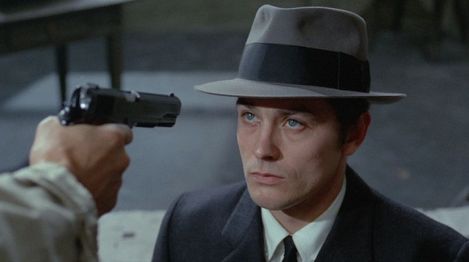 It sounds a bit odd to talk about French noir literature and films, mainly because noir is a French word. Perhaps I should be talking about Obscurité Française. This afternoon, I watched a work of that master of French noir, Jean-Pierre Melville. His film Le Samouraï is a masterpiece, both in its spare visual style and its typical noir attributes. Alain Delon as Jef Costello, the hit man, is a pleasure to watch, as is François Périer, the police superintendent, who goes all out to arrest Jef based on his belief that his alibi would not hold up.

Melville has made other excellent noir films as well, including Bob le Flambeur (1956) and Le Doulos (1963). But Le Samouraï is his best by far.

The United States has an embarrassment of riches in the genre, starting with Raymond Chandler and Dashiell Hammett, and continuing with David Goodis, Cornell Woolrich, James M. Cain, Mickey Spillane, Charles Willeford, Jim Thompson, Dorothy B. Hughes, Kenneth Fearing, W. R. Burnett, and a host of others. They are one of the joys of recent American literature which I have been taking advantage of during this long, hot summer. 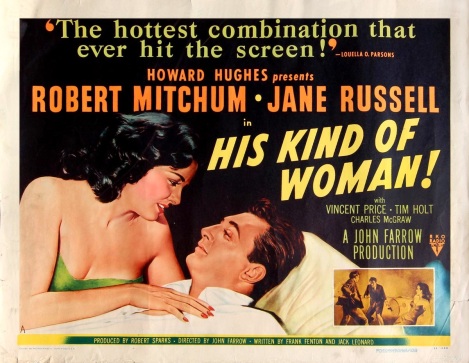 A Film Noir That Just Happens to Be Wildly Entertaining

Most film noir productions take themselves pretty seriously, but His Kind of Woman is an exception. Robert Mitchum (as Dan Milner) is hanging out at a Mexican resort with Jane Russell (as Lenore Brent) after having been advanced fifteen thousand dollars for some unknown reason. No one seems to know what is going on, until the word is about that mafioso Raymond Burr (as Nick Ferraro) is on his way to meet him. Ferraro has been banned from the U.S. and is tired of his Italian exile, so he plans to return to the States—as Dan Milner.

About midway through the film, Vincent Price (as Mark Cardigan) pretty much steals the show, playing an actor who likes to hunt, fish, and collect mistresses, including Jane Russell. When it comes time for the shooting, however, Price dons a cape, begins spouting Shakespeare, commandeers a Mexican police squadron, and takes on Ferraro and his goons with his hunting rifles.

His Kind of Woman was directed by John Farrow and (uncredited) Richard Fleischer. Although there was a lot of re-shooting to please executive producer Howard Hughes, the film isn’t as jagged as it might have been. It alternates between a film noir grimness and goofy satire.

I had seen he end several times, but last night was the first time I sat through the entire picture. 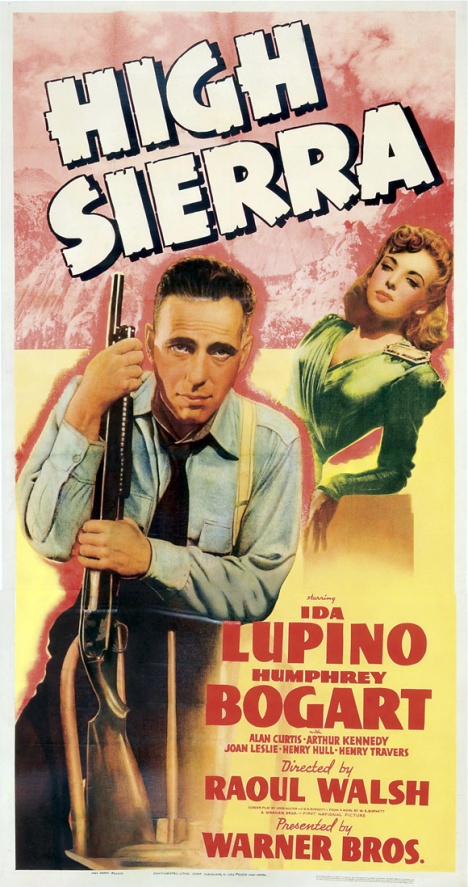 One of the Greatest Noir Pictures

Today, I came back from working on a Saturday to see the end of Warner Brothers’ High Sierra (1941) with Martine. There was Roy “Mad Dog” Earle, trapped on an Eastern Sierra cliff face and surrounded by police and reporters waiting to put an end to his career of crime. I had seen the film so many times that it was now in my blood. It was one of a handful of U.S. films that defined for me the whole American experience between the 1930s and the 1950s. I thought I would put together a list of the films in the genre that were my favorites.

Here are thirteen of them, arranged in alphabetic order:

If this seems like a long list, please note that I could have stretched it to fifty or a hundred without too much difficulty. There were a lot of noir films made in Hollywood over a long period.

Film noir is grounded neither in personal creation nor in translation of another tradition into cinematic terms. Rather it is a self-contained reflection of American cultural preoccupations in film form. In short, it is the unique example of a wholly American film style. “Film noir” is literally “black film,” not just in the sense of reflecting a dark mood in American society, but equally, almost empirically, as a black slate on which the culture could inscribe its ills and in the process produce a catharsis to help relieve them.

There is a whole galaxy of elements which, together or in unison, make up a film noir plot. They include crime, police, private detectives, “bad girls,” urban environments with “mean streets,” and both inner and outer darkness.