I have seen perhaps a dozen Chinese New Year parades, and I am quite used to seeing dragons and lion dancers. What I find interesting, however, is that there are no lions in China, nor have there been for about two thousand years. According to an article in China Highlights:

In traditional Chinese culture, the lion, like the Chinese dragon, was only an animal which existed in myth, and there were no actual lions in China. Before the Han Dynasty (202 BC – 220 AD), only a few lions had reached the Central Plains from the western area of ancient China (now Xinjiang), due to Silk Road trade.

Stone lions can be seen, however, acting as guardians to Beijing’s Forbidden City (see below). And Chinese images and beliefs relating to the mythical strength of the lion have spread around the world with the Chinese diaspora. 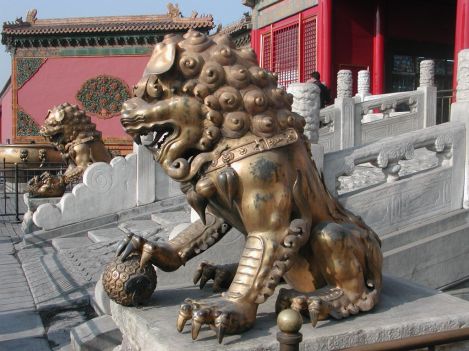 Stone Lion at the Forbidden City in Beijing

There are two styles of lion dance, the Northern and the Southern. Although most Chinese-Americans originated in South China, all the lion dancers I have seen at New Years parades were of the Northern type, which is associated with Chinese martial arts organizations. In the Northern style, only one person manipulates the lion costume. According to the China Highlights website, “Northern lion dances are more gymnastic, involving rolling, wrestling, leaping, jumping, climbing, or kowtowing.” It’s quite entertaining to see the feats of gymnastics performed by Kung Fu practitioners.