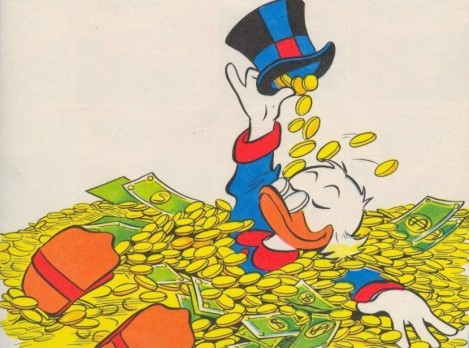 I cannot for the life of me imagine that being controlled by billionaires is somehow good for America and its people. Billionaires are essentially people who are interested only in looking after their own interests: If they can find profit in selling their grandmothers to be rendered at a glue factory, why then they will  be sorely tempted.

Why do voters admire billionaires? Do they honestly think that somehow their own financial situations will be magically improved? After all, they just as often job destroyers as job creators. You can see this in action when there is a corporate merger, followed by a round of lay-offs. Are coal miners from West Virginia or ranchers from Wyoming welcome at Mar-a-Lago? Yes, but only if they themselves are billionaires.

That is why I am not particularly excited about Michael Bloomberg becoming the Democratic candidate for President. He may have been a better mayor of New York City than Rudolph Giuliani, but I suspect he still thinks like a billionaire. 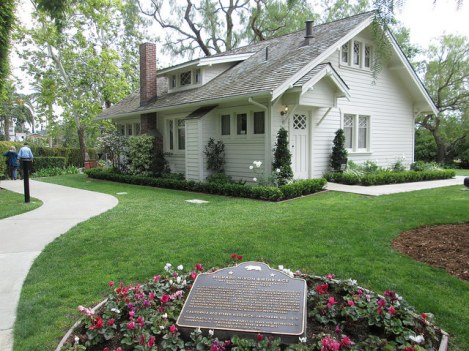 The House in Which Richard M. Nixon Was Born

Today Martine and I visited the Richard M. Nixon Library and Birthplace in Yorba Linda. It is a humble house that was built from a kit by Nixon’s father in 1912. Most of the furniture is original, including the bed in which Hannah Nixon gave birth to the 37th President of the United States. In keeping with that humility, within a few feet of the house’s rear entrance are the graves of Richard and Pat Nixon, who died within a year of each other.

There is no doubt that Nixon was a flawed man. Yet—at the same time—his list of accomplishments in office is impressive. He ended the unpopular war in Viet Nam. He ended the military draft. He was a staunch supporter of civil rights. His Title IX legislation made women’s sports at the collegiate level a major success. He courageously took it upon himself to re-open China to the West. He founded the Environmental Protection Agency (EPA). The list goes on and on.

Yet, despite his smashing victory over George McGovern in the 1972 election, he saw his opponents as a personal threat to him and initiated a burglary of the weakened Democratic National Committee in the Watergate Building. Like our current President, who also maintains an enemies list, Nixon was also a public servant who was intelligent and hard-working on behalf of the American People—which our current President is decidedly not. 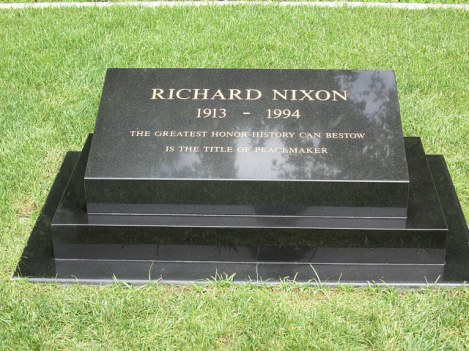 During the Sixties and Seventies, I was a determined enemy of Nixon. Now I am not so sure I feel that way. There was something about the man which could have made him our greatest political leader of this century. But he was all too human, and his life is like a Shakespearean tragedy of overwhelming promise and ambition brought down by an all-too-human flaw. 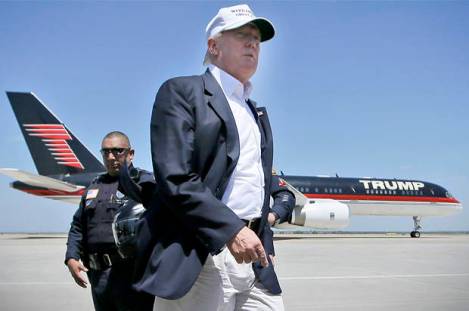 Trump with His Plane

There is a certain category of voter who thinks we need a businessman at the helm of this country. Do we? What have businessmen done for us lately?

Perhaps their biggest contribution has been to send American jobs overseas. My father used to be a machine tool builder in Cleveland. Now there is an ever-dwindling number of machine tool builders in the United States. Plenty of them in Southeast Asia, however!

If a hypothetical President Trump were in charge, what might he do? For starters, he could send less desirable (i.e. Democrat) voters to Syria, Libya, and Somalia—countries which are in the process of being rapidly depopulated.

He can raise his salary and create new perks for his office. (Isn’t that what billionaire businessmen do best?)

He could find sneaky ways of making his investments worth more (and those of his competitors worth less).

Really, in the end, all American CEOs care about is me, Me, ME, ME! After all, they didn’t get rich by helping losers. And we are all losers, aren’t we? 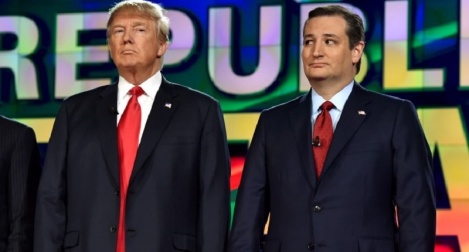 The nastiness began early last year as a whole host of candidates declared themselves for the 2016 Presidential Election. We, who pride ourselves as a nation that produces first class entertainment, have fallen down on the job. On the contrary, our elections have caused consternation among our allies and emboldened the growing number of peoples who hate us. Is this really the most powerful nation on earth? Or is this some Three Stooges pie fight?

My mailbox is filling up daily for requests for me to donate money to the Democratic Party so that they could:

All of a sudden, I am receiving numerous calls from “surveys.” I stay on the line with them only long enough to say, “We do no participate in surveys.” Apparently, I am not the only one, because a recent New Yorker article indicates that the response rate is down to eight percent or less, down from a majority a couple decades ago.

To make matters worse, I shouldn’t be surprised if the 2020 Presidential Election cranks up before the current race is resolved.

Get ready for an ugly year! 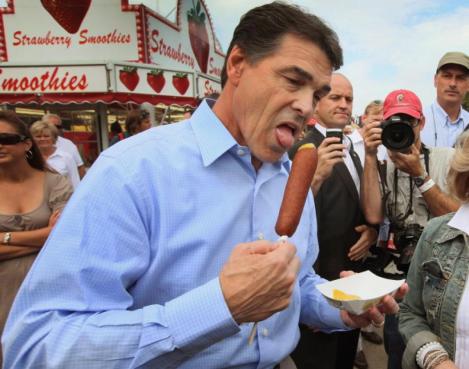 None of These Bozos Will Make It to the White House

There are currently so many GOP candidates for the Presidency that they could not fit into any vehicle smaller than the trailer of an eighteen-wheeler. Frankly, I don’t think I can name them all from memory. All I know about them is that they tend to say a lot of stupid things, which the echo chamber of the press magnifies until it seems that there is only one political party: The Tea Party.

As for Democratic front-runner Hillary Clinton, no one really likes her. I don’t like her. Martine despises her. She is probably more competent to run our country than any of the Klown Kar Republicans. But she knows that everything she says will be drowned out by cries of Benghazi! E-mail! Foundation money! Why, I wouldn’t even be surprised if Faux News reveals that she had a torrid affair with Monica Lewinsky, and they probably have the dress to prove it!

Our political process has become so toxic that the only reason I vote is that I know that, if I didn’t, some Evangelical Jesus child molester will win. Gone is any Roman sense of duty. I will trudge down to the polling precinct by myself, thinking dark thoughts, while crowded church buses full of rednecks vote en masse. 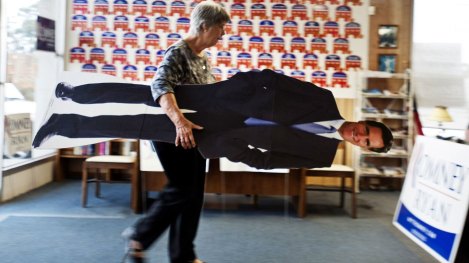 I Can’t Think of Any Advantages, Can You?

The above picture of a standee of Mitt Romney after his 2012 electoral debacle pretty much sums up for me the joys and sorrows of being the President of the United States.

I remember while growing up people asking me if I wanted to be President. While I was immensely flattered at the time, now I think the presidency is a booby prize, similar to being one of those carnival sideshow attractions in which people throw pies at your face or a ball that dunks you into a tank. This country is so evenly divided between the two political parties that you are guaranteed of being hated by millions of people, many of whom would like to see you impeached, assassinated, or at the very least publicly humiliated.

The only U.S. President in recent times to have been liked by more than 50.1% of the population was Ronald Reagan, and then even he came in for a forest of brickbats toward the end of his second term when it appeared that his memory was fading. I was actually at the Reagan Presidential Library when Ronnie died. A newsman pushed a microphone into my face and asked me what I thought his legacy would be. I answered: “I didn’t care much for him as President, but he was a good communicator.” Of course, that never made it into any news program.

I can see why Hillary Clinton may decide not to run in 2016: She would be roundly hated by millions. She saw that whole Kenneth Starr impeachment charade over her husband’s peccadilloes, not to mention that whole Whitewater fracas. And there were some who wanted to frame her for the “murder” of Vince Foster in 1993.

Would I run for President? I would—but only if I could have right-wing pundits executed at will and senate and house members arrested for being too obstreperous. And what are the chances of that ever happening? 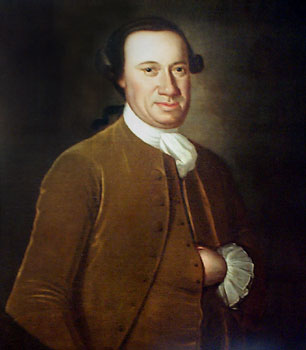 Who Was the First U.S. President?

That doesn’t look a whole lot like George Washington, does it? George became President in 1789, but the United States was already a going concern (to some extent) by 1781. So what did the country do for the intervening eight years? Did it engage in anarchy?

Yet, there were eight U.S. Presidents of the Continental Congress, and therefore of the More-or-Less-United States, serving one-year terms under those same articles. They were, in order:

Only after Griffin’s presidency did the U.S. Constitution become formally ratified and George Washington elected the “first” President under the new rules.

For an interesting discussion of these eight presidents, who have become more or less lost to history, click here.