According to sociologist Ashis Nandy, writing in 1990:

In India the choice could never be between chaos and stability, but between manageable and unmanageable chaos, between humane and inhuman anarchy, and between tolerable and intolerable disorder.

I am currently reading V. S. Naipaul’s book India: A Million Mutinies Now (1991). It is the last of the late author’s three books on India. The others are An Area of Darkness (1964) and India: A Wounded Civilization (1977). Born in Trinidad of Indian ancestry, Vidia Naipaul was a British citizen who kept trying to understand the land of his forebears.

In trying to understand India, Naipaul has helped all of us see more clearly what is an increasingly shattered society, yet one that manages to soldier on despite everything. I, who am so despairing of the split between the Trumpists and everyone else in the United States, am truly amazed that India is able to manage its own chaos so well. For now, anyway.

I have just finished reading V.S. Naipaul’s sixth novel, The Mimic Men (1967)—a semi-autobiographical work about what it is like to win fame and renown while coming from a place like the island of Trinidad, which he calls Isabella in the book. About fifty pages in, I came across his musings on politics and politicians, which I excerpt here:

Politicians are people who truly make something out of nothing. They have few concrete gifts to offer. They are not engineers or artists or makers. They are manipulators; they offer themselves as manipulators. Having no gifts to offer, they seldom know what they seek. They might say they seek power. But their definition of power is vague and unreliable. Is power the chauffeured limousine with fine white linen on the seats, the men from Special Branch outside the gates, the skilled and deferential servants? But this is only indulgence, which might be purchased by anyone at any time in a first-class hotel. Is it the power to bully or humiliate or take revenge? But this is the briefest sort of power; it goes as quickly as it comes; and the true politician is by his nature a man who wishes to play the game all his life. The politician is more than a man with a cause, even when this cause is no more than self-advancement. He is driven by some little hurt, some little incompleteness. He is seeking to exercise some skill which even to him is never as concrete as the skill of the engineer; of the true nature of this skill he is not aware until he begins to exercise it. How often we find those who after years of struggle and manipulation come close to the position they crave, sometimes indeed achieving it, and then are failures. They do not deserve pity, for among the aspirants to power they are complete men; it will be found that they have sought and achieved fulfilment elsewhere; it takes a world war to rescue a Churchill from political failure. Whereas the true politician finds his skill and his completeness only in success. His gifts suddenly come to him. He who in other days was mean, intemperate and infirm now reveals unsuspected qualities of generosity, moderation and swift brutality. Power alone proves the politician; it is ingenuous to express surprise at an unexpected failure or an unexpected flowering.

What happens when one of your favorite authors forms a friendship with another of your favorite authors and then writes a book about that friendship? That’s the case when Paul Theroux came out in 1998 with Sir Vidia’s Shadow: A Friendship Across Five Continents. Both authors wrote not only novels but travel books. IMHO, Naipaul was the better novelist (by a long shot); but Paul Theroux’s travel books are far better—to the extent that they have played a major role in the way I lived my life over the last forty years.

Sir Vidiadhar Surajprasad Naipaul was born in Trinidad of a Hindu Indian family. He parlayed his colonial background into a brilliant series of novels which eventually gained for him a knighthood (in 1990) and the Nobel Prize in Literature (in 2001). He encountered Paul Theroux in Uganda, where both were living for a while. They became fast friends even before Theroux published his first novel.

That friendship became an instrumental part of Theroux’s life. Even when separated by thousands of miles, they wrote to each other frequently. He was even sexually attracted to Naipaul’s first wife, Patricia, who died in 1996.

Throughout the long friendship, Vidia Naipaul turned out to be a rather prickly individual. Some of it was due to his Brahmin fastidiousness:

“What happened?” I asked.

“One of the workmen in Vidia’s bedroom was explaining something,” Pat began.

His face twisted in nausea, Vidia said, “And he sat on my bed…. He put his bottom on my bed.”

What would have bothered me more than it seemed to bother Theroux was that Naipaul was notorious about not picking up the check when they went out for dinner. And this was at a time when Paul was at the beginning of his career and constantly short of funds.

When Patricia died, the friendship suddenly came apart. Shortly after the funeral, Vidia married an Indian woman named Nadira, whom he had met previously in Africa. Quite suddenly, all of Paul’s attempts to contact Vidia were intercepted by Nadira, who was highly critical of the American writer.

The coffin nail was driven into the friendship when Paul and his son were taking a walk in London and suddenly encountered Vidia, who did not acknowledge him. When Paul addressed him, Vidia finally recognized him. When asked if he had received a recent fax from Paul, Naipaul was reluctant to discuss the matter further. When Paul asked what was to be done, Naipaul answered, “Take it on the chin and move on.”

He knew. It was over. It never occurred to me to chase him. There would be no more. And I understood the shock of something’s being over, like being slapped—hurt as the blood whipped through my body. “Like being hit by a two-by-four,” my friend had said when Vidia insulted her in Oregon.

This exchange takes place on the last page of the book. Theroux could have done a job of character assassination on his old friend, but he chose not to. After all those years, the friendship had meant a great deal to him, even if it ended badly.

I, too, have had prickly friends. Some I walked away from. Some I took up with again after a number of years had transpired. Would I have done differently than what I wound up doing in the end? Probably not.

In the end, I really liked Theroux’s book, which demonstrated that—for a time—his friendship with Vidia had great value in his life. 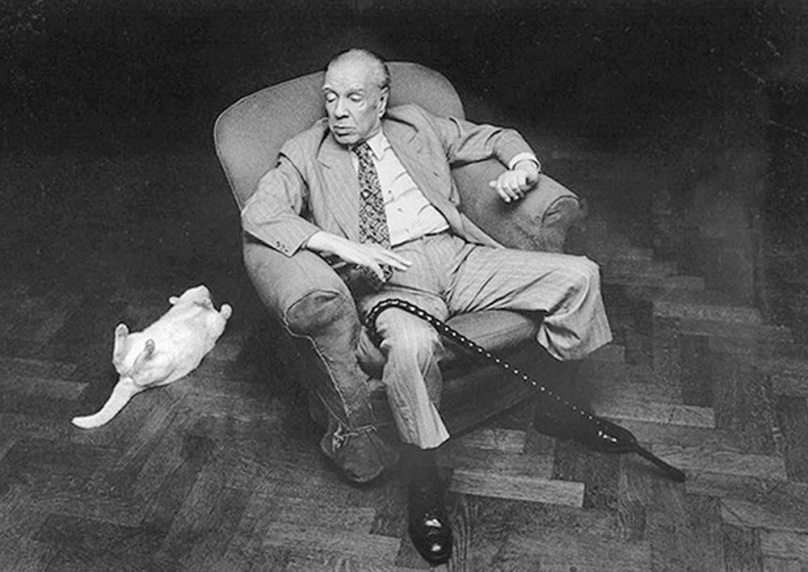 Jorge Luis Borges Giving an Interview for Spanish Television in 1967

I was just looking through V. S. Naipaul’s A Turn in the South (1989) when a passage on page 57 suddenly struck my eyes. Toward the end of his life, Jorge Luis Borges was blind. During this time, he gave many interviews which were published (I have at least a dozen of them on my shelves). My guess is that he saw the interviews as an easy replacement for having to write the stories, essays, and poems for which he was famous.

It was something I had worried about that these figures of Atlanta, because they had been so often interviewed, and though they might appear new to the out-of-towner, might in fact have been reduced to a certain number of postures and attitudes, might have become their interviews. Like certain writers—Borges, to give a famous example, who had given so many interviews to journalists and others who, in the manner of interviewers, had wanted absolutely the set interview, the one in the file, had wanted to leave out nothing that had occurred in every other interview, that he, Borges, had finally become nothing more than his interview, a few stories, a few opinions, a potted autobiography, a pocket personality. Which was the way, I had been told, the media created two or three slogans for a politician and reduced him to those easily spoken words.

Fortunately, Borges was wily enough to give a series of varied interviews which, though they had some common elements, especially in the area of “a potted autobiography,” are still capable of entrancing the reader.