Isla Negra Where Neruda and His Wife Are Buried

I haven’t written about South America lately, so I decided to return to it. If my visit to Chile seems haphazard and unplanned (Puerto Varas to Valparaíso to Santiago), it is because my sightseeing goals were, to say the least, abstruse. Remember, I probably wouldn’t have gone to Argentina if it weren’t for my readings of such writers as Jorge Luis Borges, Adolfo Bioy Casares, Juan José Saer, and César Aira. My favorite Chilean writer is the poet Pablo Neruda. So I went to Chile to visit his three houses.

It’s not really abstruse, I guess, because Neruda was not only a great poet; he was also a great domestic architect and designer. He had some money to work with because he was not only a poet, but served various diplomatic posts, particularly in Mexico.

The first house I visited was at Isla Negra, about an hour south of Valparaíso. It was my favorite of the three, located as it is on a nice stretch of beach. Also it was not trashed by Pinochet’s fascist supporters after Salvador Allende fell, like La Chascona in Santiago was. Isla Negra seems to go on forever, with quirky bars, dining rooms, nautical and railroad themes, and fascinating collectibles. 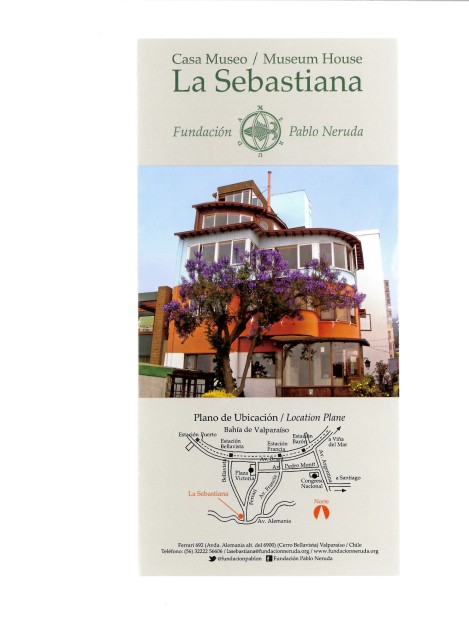 High on a hill, on Avenida Alemania, with a sweeping view of Valparaíso’s bay, is the towering La Sebastiana. Like Isla Negra, it still has all the original furnishings, with the poet’s quirky love of nautical themes. On the day I went, the house was full of French tourists. 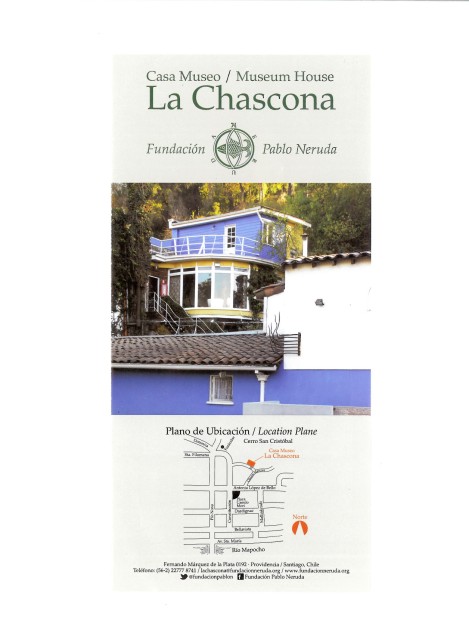 Finally, in the city’s ritzy Bellavista area is La Chascona, which means “messy hair.” The reference is to wife Matilde Urrutia’s hair. This house is tucked against a hill and does not have any sweeping views the way the other two houses do. Although the original furnishings were trashed in 1973 by fascisti supporting dictator General Augusto Pinochet, Matilde managed to salvage many of her late husband’s original decorations, such that one scarcely notices the damage that had been done. 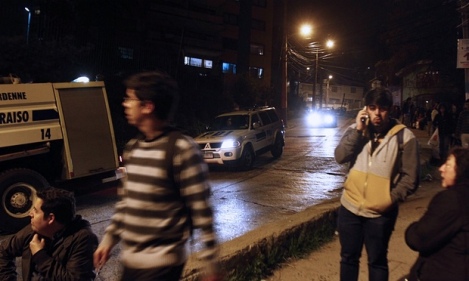 In about two months from now, I will be in one of the Ring of Fire’s “Hot Zones”—coastal Chile, where a Richter 8.3 quake has just struck not more than a couple of hours ago. Most articles centered on the effects of the quake on Santiago, though the epicenter was 144 miles northwest of the capital, which suffered minimal danger because  it is built on rock, namely the foothills of the Andes.

The city of Coquimbo, nearer the epicenter, has already seen tsunami waves as high as 4.5 meters (about 14 feet), and even California and New Zealand are expected to feel some activity.

I will be in Valparaíso for several days in late November, though I will be on higher ground on Cerro Alegre. The port area is probably the most dangerous area: If there is another major earthquake, people will be running for the forty-three hills that surround the city in a semicircle. 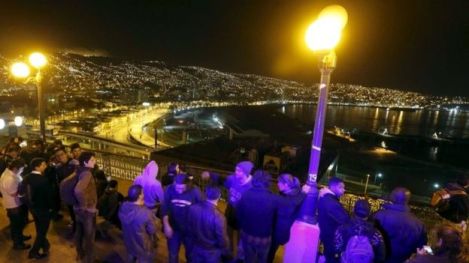 Oh, I suppose I could visit less dangerous areas, like North Dakota or Manitoba, but I’ve always wanted to visit Chile, even if for just a few days. By then, with luck, the aftershocks will have died down some.

Today, I checked the volcanic activity at Calbuco and was delighted to find that its alert status has been lowered to green. 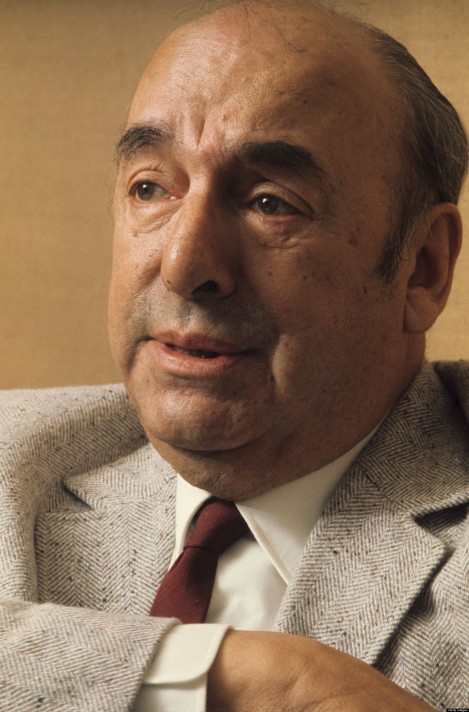 For many years, it was thought that Pablo Neruda was poisoned by order of General Augusto Pinochet Ugarte because of his association with Salvador Allende. Inasmuch as he died only twelve days after Allende, foul play was assumed. Until recently that is. when Neruda’s body was exhumed by a team of forensic scientists, who found no evidence of poison.

I thought I would celebrate this finding by giving you Margaret Sayers Peden’s translation of Neruda’s “Ode to Age”:

I don’t believe in age.
All old people
carry
in their eyes,
a child,
and children,
at times
observe us with the
eyes of wise ancients.
Shall we measure
life
in meters or kilometers
or months?
How far since you were born?
How long
must you wander
until
like all men
instead of walking on its surface
we rest below the earth?
To the man, to the woman
who utilized their
energies, goodness, strength,
anger, love, tenderness,
to those who truly
alive
flowered,
and in their sensuality matured,
let us not apply
the measure
of a time
that may be
something else, a mineral
mantle, a solar
bird, a flower,
something, maybe,
but not a measure.
Time, metal
or bird, long
petiolate flower,
stretch
through
man’s life,
shower him
with blossoms
and with
bright
water
or with hidden sun.
I proclaim you
road,
not shroud,
a pristine
ladder
with treads
of air,
a suit lovingly
renewed
through springtimes
around the world.
Now,
time, I roll you up,
I deposit you in my
bait box
and I am off to fish
with your long line
the fishes of the dawn!

It is my hope to read more of Neruda’s poetry before I visit his houses near Valparaiso, Chile. 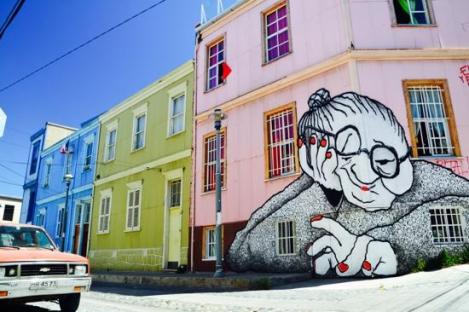 I’m Starting to Book My Vacation…

I’ve already begun booking my vacation, even though it is still months in the future. There are still a few question marks. Now that Calbuco has gone to orange alert, I suspect I won’t have any major volcano troubles.The biggest question right now is how I will get a reservation on the November 13 Tren Patagonico between Viedma and San Carlos Bariloche. I suspect what I’ll do is contact an English-speaking tour agency in Buenos Aires, one like Say Hueque, which is geared to more independent travelers like me.

According to the international rail travel website The Man in Seat 61:

Viedma is across the river by small ferry from Carmen de Patagones, but no same day connection is possible so you need a night in a hotel. The Trén Patagonico from Viedma to C. de Bariloche is tremendous fun and thoroughly recommended!  Comfy secure sleeping cars (solo travellers are given a compartment to themselves and a key to lock it), excellent dining car serves steaks and wine, good company and wonderful Patagonian scenery in the morning. Excellent value, and you can buy the tickets in advance in Buenos Aires at Gallerias Rio Negro on Reconquista.

I’m afraid that by the time I get to Gallerias Rio Negro on November 4, the train will be all sold out.

In the meantime, I booked a ideally situated hotel overlooking the Recoleta Cemetery on Azcuénaga in Buenos Aires, and a nice boutique hotel near the river in Puerto Iguazu. For Valparaíso, I’ll be at the La Nona B&B on Galos (Wales) Street atop Cerro Alegre. It’s in the blue building on the left in the above photo. 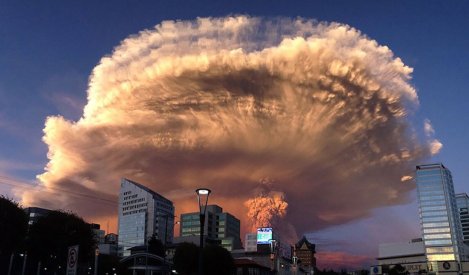 I’m Tired of Being Pushed Around by Natural Disasters

In 2011, it was Puyehue-Cordon Caulle that forced me to change my itinerary. This time, it’s Calbuco (see above). I guess I could just pussyfoot around until it’s time to go and switch my plans once again. This time around, I decided to bet that, by mid-November, Calbuco will be all played out. (Of course, Sernageomin still rates it as red for imminent eruption or eruption in progress.)

Consequently, today I decided to fly into Buenos Aires and, in true “open jaws” style, return via Santiago, Chile. That means I will take the lakes crossing trip from San Carlos Bariloche to Puerto Varas. If Calbuco still insists on spewing crap along my path, I will just go around it. There are other border crossings that are perhaps less convenient, but I’ll cross that bridge when I come to it.

Why am I going home by way of Chile? First of all, I’ve always wanted to visit Valparaíso. My reason for it goes back more than half a century. While a student at Dartmouth College, I saw an almost impossibly poetic documentary by Joris Ivens called … à Valparaíso (1963). If you have a half hour to spare, and don’t mind the French narration, you can see it here on YouTube.

I plan on spending several days in Valparaíso, visiting the homes of poet Pablo Neruda, climbing the endless stairs, taking the funiculars that ascend the forty-two hills of the city. Some people prefer the beach. I’ll take poetry and beauty any time!