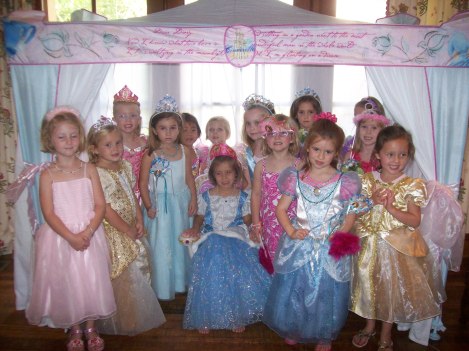 Today, Martine and I spent the afternoon at the L.A. Greek Fest near downtown. Because the temperature was well into the Nineties, we spent most of our time in the school gym, which was air-conditioned and supplied with large tables. Around the edges of the room were merchants selling various gift items, including tiaras and shiny accessories to make little girls’ dresses resemble the costumes of fairy princesses. One even resembled an Egyptian headdress with a snake like the crown we imagine Cleopatra as sporting. Several little girls were prancing around the room with the sense of entitlement that a princess costume bestows on its wearers.

Really, what is a princess if not a girl who is entitled from birth? What does one do to become a princess? Simple: One is born to royal parents. And when a little girl grows up thinking she is a princess, what are her chances of happiness in a world in which a sense of entitlement will only carry one so far? Really, what is a true-life princess born into except the dynastic pursuit of a [preferably] male heir? In Westwood, near the UCLA campus, there are legions of little princesses who are now in their twenties. In lieu of fairy wands, they carry smart phones , but they still dress fancifully in other ways. Not a pretty sight.

And then I wonder: Am I carrying this too far? After all, little boys are drawn to violent fantasies of battle which are carried forward into the teen years with video games. Even I played cops and robbers and [shudder] cowboys and Indians. But what I really loved more than anything else were my plastic bricks. I would not only use my toy soldiers for going into battle: I actually created little cities for them, with more officers’ titles to go around than I had toy soldiers. Then, too, there was my Lionel O-Gauge electric train, which I played with for over a decade. Again, as with my toy soldiers, I made up series of towns connected by the railroad, complete with schedules. I remember that was a great deal of fun, and constructive, too, in the long run, because it gave play to my imagination.

But thank God I never wanted to be a little princess. Maybe a prince… I had dreams of being visited by people from Hungary who declared I was to be the new monarch of the ex-Communist satellite. That would have been dicey, because my father and my uncle were identical twins.