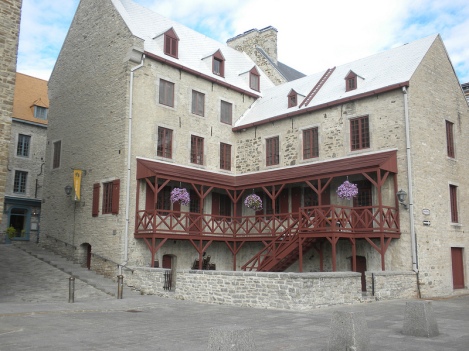 17th Century-Style Buildings by the Harbor in Quebec City

Today, Martine and I had dinner at a French Canadian restaurant in Westwood: Le Soleil on Westwood Boulevard. While I am dreaming of going to Peru, Martine would like to revisit the Province of Quebec and perhaps drive around a bit. It’s possible that I may yield to her: There is something about Quebec that draws out the Frenchwoman in her, and where else in North America can one feel so much like being in Europe?

What most people don’t know is that there is a part of Metropolitan France right off the south coast of Newfoundland. The islands of St. Pierre and Miquelon, a short ferry ride away from the town of Fortune, Newfoundland. The islands are all that remain of the extensive lands of New France lost to Britain in the French and Indian War. It is a little known fact that, during Prohibition, Chicago gangster Al Capone used the islands as a base for illegally importing wine and liquor into the United States. I don’t know if it’s feasible to include St. Pierre and Miquelon on a trip to Quebec, as they are many hundreds of miles apart; but perhaps some day….

I’m glad that Martine liked the Boeuf Bourguignon and Crême Brulée at Le Soleil. She tends to think that most French restaurants in L.A. are not sufficiently authentic, but this Quebecois restaurant seemed to have some of the real stuff.