I would like to say a few words on this subject [of Anna Politkovskaya’s murder]. First of all, I would like to say that no matter who committed this crime and no matter what the motives behind it, it was a horribly cruel crime and it cannot go unpunished. There could have been a number of different motives. This journalist was indeed a fierce critic of the current authorities in Russia. But, as the experts know, and as journalists should realise, I think, her impact on Russian political life was only very slight. She was well known in the media community, in human rights circles and in the West, but her influence on political life within Russia was very minimal. The murder of someone like her, the brutal murder of a woman and mother, was in itself an act directed against our country and against the Russian authorities. This murder deals a far greater blow to the authorities in Russia, and in Chechnya, to which she devoted much of her recent professional work, than did any of her publications. This is very clear to everyone in Russia. But, as I said, no matter what the motives behind the perpetrators’ actions, they are criminals and they must be identified, caught and punished. We will do everything necessary to ensure that this is done.—Vladimir Putin, News Conference in Germany, 2006 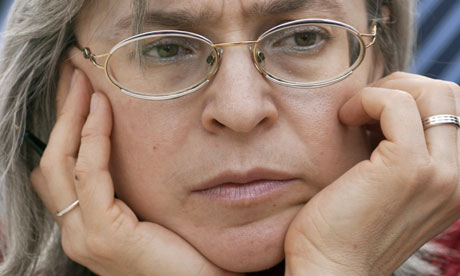 This is an article I wrote for the old Yahoo! 360 back in 2008. Currently, I am reading Is Journalism Worth Dying For? Final Dispatches.

I have just had a harrowing experience, having finished reading Anna Politkovskaya’s A Dirty War: A Russian Reporter in Chechnya. We don’t hear much about Chechnya these days: Vladimir Putin has succeeded in muddying the waters by getting us all to regard the entire civilian population of the province as Muslim terrorists. Based on Politkovskaya’s reportage, there are actually four groups of terrorists in Chechnya:

Running through the book are a series of stories about the Grozny Old Peoples’ Home. Most of the sick, elderly tenants are Russians, not Chechens; Russian Orthodox, not Islamic. Yet the residents are treated by all parties as the enemy. Politkovskaya (photograph above) wrote several articles explaining their plight, checking back with them every few months. They had no food or medical care, and were afraid to venture outside for fear of running afoul of armed parties of any description.

The only hospital in bombed-out Grozny had a few volunteer doctors, but no medicines. Such medications as were sent from Moscow were intercepted by the Chechen [pro-Russian] civilian government and sold on the black market.

When there were too many casualties in a Russian army operation, it was not unusual for the wounded to be taken not to a nearby military hospital, but to a more distant civilian hospital where there was no electricity, no medications, and only a skeleton staff. Whether they live or die, they are considered as deserters and therefore do not adversely affect any Russian officer’s military reputation. Many of the wounded soldiers die without identification, leading their families to spend years and a small fortune trying to find out what happened to their sons. (I wonder if this sort of thing was also going on [during the Soviet occupation of] Afghanistan.)

If you leave your apartment in Grozny, be very careful. You might find well-hidden anti-personnel mines at your doorstep or even within the apartment. This is a common cause of death throughout Chechnya.

When Politkovskaya encountered particularly obnoxious politicians or generals, she would publish their cell phone numbers in the Novaya Gazeta, for whom she worked at that time, and urge people to say to their face what they thought of them.

As one could expect, a woman like this makes lots of powerful enemies. On October 7, 2006, the crusading journalist was shot to death in the elevator on the way to her apartment in Moscow. After an “investigation” of sorts, no guilty party was found. Vladimir Putin, who most likely ordered the assassination, points the finger at some unnamed gunman from the West. After all, he says, she had no influence in Russia: Her audience were mostly liberals in Europe and America.

Politkovskaya was a singularly brave journalist and paid the ultimate price for it. Compare them to American journalists who were supinely complicit in the atrocities of the Bush-Cheney administration. No awards for courage there.