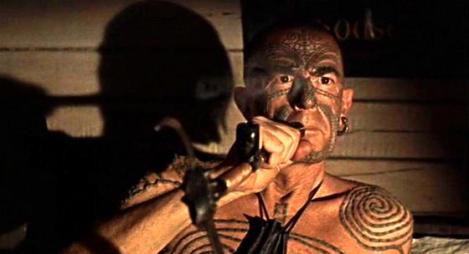 Today, I found myself waiting in the library of Loyola Marymount University for several hours while Martine did her errands. So I went over to the bookstore and bought the Norton Critical Edition of Herman Melville’s Moby-Dick and began my third reading of the classic. To my surprise, it didn’t take long into the book before I found the perfect paradigm of the United States in dealing with the rest of the world.

At the Spouter Inn in New Bedford, Massachusetts, Ishmael can have a place to sleep only if he shares a bed with the harpooner who rents the room. According to the landlord, he is out trying to “sell his head.” Ishmael tries sleeping on a downstairs bench that is too narrow and too short, but finally decides to take a chance. His awakening when the harpooner stumbles in in the middle of the night is a classic:

Lord save me, thinks I, that must be the harpooneer, the infernal head-peddler. But I lay perfectly still, and resolved not to say a word till spoken to. Holding a light in one hand, and that identical New Zealand head in the other, the stranger entered the room, and without looking towards the bed, placed his candle a good way off from me on the floor in one corner, and then began working away at the knotted cords of the large bag I before spoke of as being in the room. I was all eagerness to see his face, but he kept it averted for some time while employed in unlacing the bag’s mouth. This accomplished, however, he turned round—when, good heavens! what a sight! Such a face! It was of a dark, purplish, yellow colour, here and there stuck over with large blackish looking squares. Yes, it’s just as I thought, he’s a terrible bedfellow; he’s been in a fight, got dreadfully cut, and here he is, just from the surgeon. But at that moment he chanced to turn his face so towards the light, that I plainly saw they could not be sticking-plasters at all, those black squares on his cheeks. They were stains of some sort or other. At first I knew not what to make of this; but soon an inkling of the truth occurred to me. I remembered a story of a white man—a whaleman too—who, falling among the cannibals, had been tattooed by them. I concluded that this harpooneer, in the course of his distant voyages, must have met with a similar adventure. And what is it, thought I, after all! It’s only his outside; a man can be honest in any sort of skin. [Italics mine] But then, what to make of his unearthly complexion, that part of it, I mean, lying round about, and completely independent of the squares of tattooing. To be sure, it might be nothing but a good coat of tropical tanning; but I never heard of a hot sun’s tanning a white man into a purplish yellow one. However, I had never been in the South Seas; and perhaps the sun there produced these extraordinary effects upon the skin. Now, while all these ideas were passing through me like lightning, this harpooneer never noticed me at all. But, after some difficulty having opened his bag, he commenced fumbling in it, and presently pulled out a sort of tomahawk, and a seal-skin wallet with the hair on. Placing these on the old chest in the middle of the room, he then took the New Zealand [shrunken] head—a ghastly thing enough—and crammed it down into the bag. He now took off his hat—a new beaver hat—when I came nigh singing out with fresh surprise. There was no hair on his head—none to speak of at least—nothing but a small scalp-knot twisted up on his forehead. His bald purplish head now looked for all the world like a mildewed skull. Had not the stranger stood between me and the door, I would have bolted out of it quicker than ever I bolted a dinner.

Little by little, Ishmael and Queequeg (for such is his name) warm up to each other. Returning from the famous sermon in the Whaleman’s Chapel, Ishmael encounters Queequeg again at the Spouter Inn:

With much interest I sat watching him. Savage though he was, and hideously marred about the face—at least to my taste—his countenance yet had a something in it which was by no means disagreeable. You cannot hide the soul. [Italics mine] Through all his unearthly tattooings, I thought I saw the traces of a simple honest heart; and in his large, deep eyes, fiery black and bold, there seemed tokens of a spirit that would dare a thousand devils. And besides all this, there was a certain lofty bearing about the Pagan, which even his uncouthness could not altogether maim. He looked like a man who had never cringed and never had had a creditor. Whether it was, too, that his head being shaved, his forehead was drawn out in freer and brighter relief, and looked more expansive than it otherwise would, this I will not venture to decide; but certain it was his head was phrenologically an excellent one. It may seem ridiculous, but it reminded me of General Washington’s head, as seen in the popular busts of him. It had the same long regularly graded retreating slope from above the brows, which were likewise very projecting, like two long promontories thickly wooded on top. Queequeg was George Washington cannibalistically developed.

Fear is not only a mind killer, it is also a killer of otherwise innocent black people who are confronted with very limited white people who don’t know how to take them.

4 thoughts on “Serendipity: Ishmael and Queequeg”